Did you know that you create your own energy field? It’s true. The abundance of electrical impulses (aura) from your brain to the nerve endings of your body creates an energy field.

Incredibly, we impact our energy field (or ‘aura‘) by our mental, emotional, physical, and spiritual states. The environment in which you surround yourself also affects your aura. Ever heard the phrase “you are a product of your environment”? Well, your aura may just be part of that.

“All phenomena- from the planet we inhabit to the oceans, clouds, forests and flowers that surround us, arise in dependence upon subtle patterns of energy.” – The Dalai Lama

Most of us cannot see energy without the assistance of scientific instruments. Bioelectrophotography captures these energy fields as a permeating light around the body.

Your aura will often radiate a colorful, brilliant glow when you’re feeling happy, feeling blessed, or just being in a positive state of mind. Additionally, your heart will actually emit a pink and gold-like glow in vibrant form when feeling any of these positive emotions.

When you’re feeling angry, sad, depressed, anxious, or any other negative state, your body minimizes your aura emission. Indeed. the color dulls. The vibrancy loses its glow and its allure, kind of how your state of mind becomes doom and gloom when feeling bad. 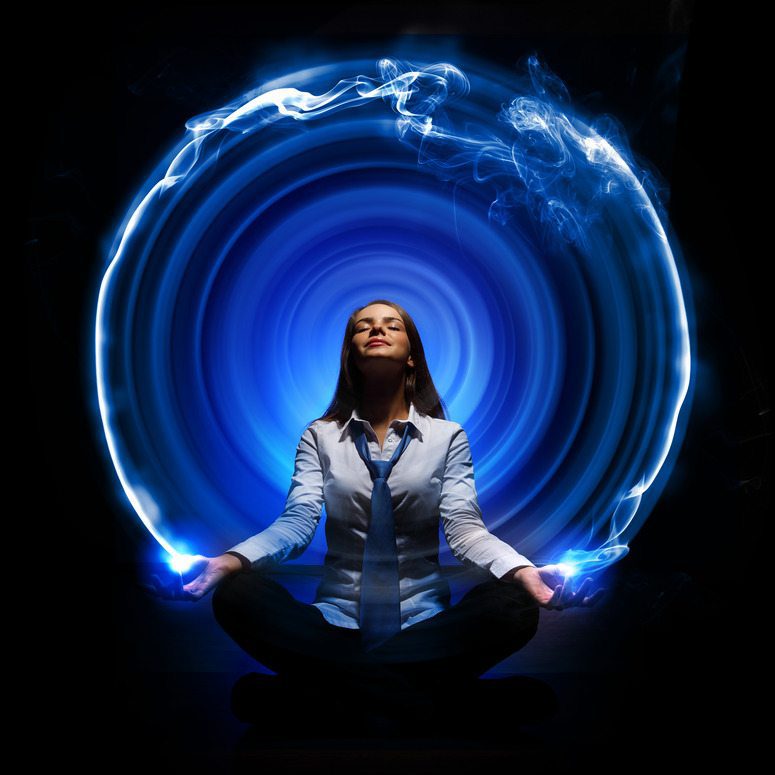 More amazing is the idea that you may just be able to change the world by using your own energy. While certainly not a new idea (Buddhists have believed this for thousands of years), the notion was sorely lacking any backing or legitimacy from the scientific community.

Then, a Russian scientist by the name of Dr. Konstantin Korotkov, a professor of physics at St. Petersburg State Technical University in Russia, proclaimed that our energy and consciousness has an impact on our surrounding environment.

He also claimed that both human beings and elements found in nature have their own energy fields and that these energies can interact with one another (further examined in the Princeton study, below).

Dr. Korotkov developed the technique known as Gas Discharge Visualization (GDV). This is a collection of techniques enabling the capture of electrical energy fields. In doing so, Korotkov discovered ways to view the emotional, mental, physical, and spiritual energy radiated from human beings and other natural elements.

GDV facilitated the patenting of Electrophotonics, Korotkov’s technology line that captures energy emanating from humans, inanimate objects, liquids, plants, and powders, and convert these images into a digitized model.

Korotkov and his researchers state that this technology can detect abnormal energy fields, and can facilitate the diagnosis of various ailments and other physical and emotional imbalances.

In addition to diagnosis, Korotkov and his fellow scientists are researching how GDV and electrophonic can assist with potentially life-saving treatments for cancer. Besides medicine, technology is utilized in fields such as agriculture, biophysics, ecology, genetics, forensic science, and psychology.

Take note that Dr. Korotkov is not alone in proclaiming that our mind and energy can alter our material world.

The PEAR program focuses on “studying the interaction of human consciousness with sensitive physical devices, systems, and processes, and developing complementary theoretical models to enable better understanding of the role of consciousness in the establishment of physical reality.”

They also established a non-profit research organization and a company that provides devices specifically designed to be used for research.

In other words, one of the world’s top research institutions thinks there’s enough to Dr. Korotkov’s “consciousness can directly influence our world” thing to invest millions of dollars into a program dedicated to its study, a non-profit research organization, and a company that manufactures devices to be used for the study.

Princeton scientists in the PEAR program use devices called random event generators (REG) in many of their experiments. These devices randomly generate a string of numbers, which are then stored in computer files.

One of these REG machines replicates coin flips. So, when left alone, the machine flips at about a 50/50 clip of heads and tails, as expected. However, when researchers placed a human being near the machine and told them to focus intently on heads or tails, the results changed to more heads or tails!

Here is an outcome that’s even more interesting. When two people in a relationship, such as a married couple, focused on the same heads/tails outcome, the results were intensified. Indeed, even more heads or tails occurred. According to researchers, this happened in virtually every experiment.

“Now I realize that it isn’t the miracle that creates the believer. Instead, we are all believers. We believe that the illusion of the material world is completely real. That belief is our only prison. It prevents us from making the journey into the unknown.” – Deepak Chopra

This phenomenal quote by Dr. Deepak Chopra summarizes the common person’s thought process in five sentences. Almost all of us unconsciously default to this frame of mind when going about our daily lives.

Einstein wrote the revolutionary formula of E=mc2 in 1905. Of course, this theory demonstrates that the mass of an object and its energy are the same. Yet, we took almost 120 years to begin making the connection between humans, our energy, and our universe!

The fact is that everything we see, hear, touch, smell, and taste consists of energy. Scientists all over the world are beginning to discover the interconnectivity of seemingly unrelated elements. Of course, all this happens through the study of electrical and magnetic fields.

The future of human energy fields, our consciousness, and how it can influence the world is truly exciting and potentially revolutionary.

8 thoughts on “The Human Aura: What Is It and How Does it Work?”