Addressing What Lazy Is (And What It Isn’t)

This part will be quick: We are all hardwired to be lazy. And we are all guilty to some degree.

Scientists believe that this “laziness” is actually a lingering trait from the days of yore when our distant ancestors needed to conserve every ounce of energy for the next hunt.

A study published in the journal Current Biology states that when we’re in motion, the body automatically adjusts to the most efficient (read: non-fat-burning) way possible. The body is inherently lazy.

“What about the brain,” you ask?

The brain consumes 20 percent of our total energy – despite weighing just over three pounds. Neuroscientists estimate that the average brain generates up to 50,000 thoughts per day, at a speed of over 260 miles per hour. Like a car, the brain must conserve fuel – and it does so by shutting down, or being “lazy.”

“The evidence is persuasive: activities that impose high demands (on the thinking brain) require self-control, and the exertion of self-control is depleting and unpleasant.”

In other words, the brain and body are designed to be efficient as to conserve energy. Unfortunately, our default mode for saving energy may involve a soft recliner, Netflix, and some Baskin Robbins.

Do you know how many “logical” people there are in the world? Take a guess, but know that the answer may surprise you. Got it?

The answer is zero. Give or take zip.

Bad joke aside, human beings are somewhat illogical creatures. Our brain – the apparatus that controls just about every thought, feeling, and behavior – doesn’t “do” absolute logic. Adding to Mr. Dachis’ above points, if we were entirely logical, we’d be robotic; for the be 100 percent logical, we must be zero percent emotional.

In other words, emotions influence our decisions. Even the most disciplined people in history have made poor decisions under the influence of heavy emotions.

“If we were entirely logical, we’d be able to abandon our bad habits, curb temporary moments of insanity, and practice self-control. Our logic is paired with emotion, however, and sometimes our emotions motivate us to make poor decisions.” ~ Adam Dachis

The Importance of Mindset

As emotions influence our decisions, they indisputably affect our habits. Think of a bad habit that you have. Got it?

Now ask yourself: Why do you keep doing it? You know the habit is bad, after all. (There goes logic.)

Well, if you look at the same data that scientists look at, you’ll see that your mindset is overwhelmingly the most significant factor to your continued “deviance.”

Carol Dweck, a Stanford University psychologist and author of the book Mindset, writes, “in decades of research on achievement and success – a simple idea makes all the difference.” The simple idea? Mindset.

The central findings of Dweck’s work can be explained in a few bullet points:

– Praising smarts and talent does not encourage accomplishment and self-esteem; it jeopardizes them.

– “Overachievers” value their dedication and hard work over their inherent abilities. (Kind of like Einstein saying “I’m not a genius,” or Edison boasting that he failed 99 times, but found the one time that worked.)

– Love of learning and resilience are crucial for high accomplishment.

– All of these things are teachable.

At the crux of it all: the fixed mindset and the growth mindset. 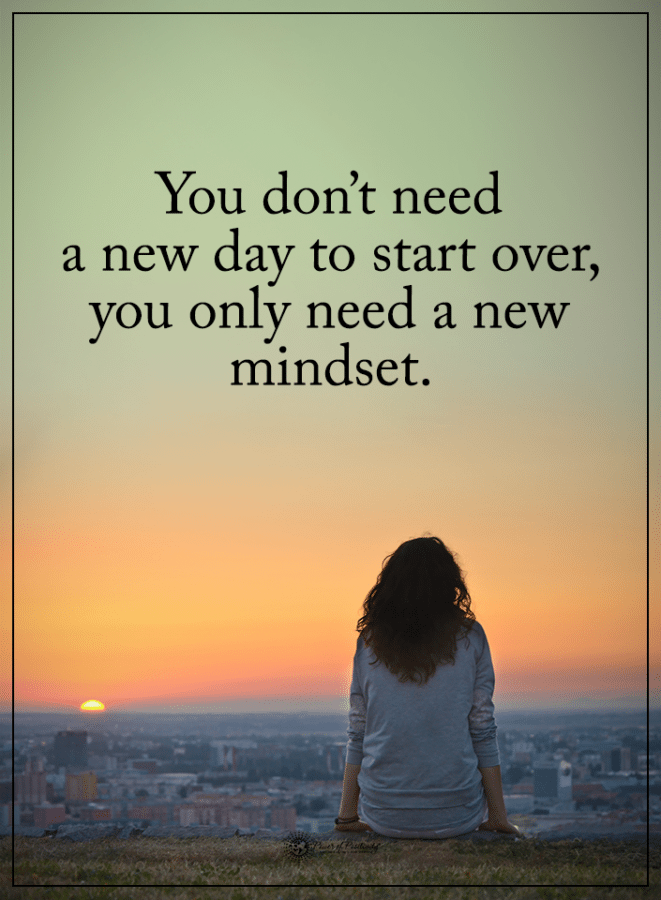 Individuals with a fixed mindset believe that their fundamental qualities, like their intelligence, talent, and resilience, are set in stone – or fixed traits. These folks believe that talent – or worse, luck – determines one’s success in life. (Luck certainly plays a part, but the reason for most people’s success? Get outta here.)

The vast majority of scientific literature (like Carol Dweck’s) burst these peoples’ bubble quick, fast, and in a hurry. Not only is the fixed mindset empirically disproven and categorically false, but it’s also typically a one-way ticket to failure.

Unsurprisingly, according to Dr. Dweck, virtually every great person has had a growth mindset.

When it comes right down to it, one’s ability to stay on course in achieving a particular goal – whether it’s losing weight, improving grades, saving money, eating healthier, exercising more, whatever – comes down to whether or not they have, or are working towards, a growth mindset.

Too many people think that the answer lies in motivation. It doesn’t – not one iota. Motivation is fickle and unreliable. Motivation will let you down because it isn’t always present. You won’t always feel like doing what you need to do. What you need is to adopt a different mindset.

Nobody reading these words has to be a victim of his or her circumstances, no matter how unmotivated they may feel. The brain can be trained like any other muscle: if we want to develop a growth mindset, we teach ourselves to think that way one step at a time.

Here is the A-B-C method for developing a growth mindset:

Acknowledge and embrace your weaknesses:

We must always begin in the spot we stand. Human frailty is inevitable; it’s whether or not you acknowledge and work towards converting them into a strength that counts.

The best piece of advice here is to know that self-control is hard yet rewarding. By continually exercising restraint, you strengthen your self-discipline. In every moment that you don’t give into temptation or weakness, your character is becoming stronger.

Change one habit at a time:

The unfortunate truth is that our energy, attention, and willpower are limited resources. (See Daniel Kahneman’s quote above.)

So, focus on taking concrete steps and change one habit before moving on to the next. And never, ever give up!