What is brain cancer?

Brain cancer is a disease characterized by the presence of malignant (cancerous) cells in the brain tissue. Cancer cells usually impact bodily and cognitive functions, including muscle control, memory, respiration, and others.

Brain cancer, while serious, is quite rare. Studies estimate that the illness accounts for less than 1.5 percent of all new cancer cases. Per the National Cancer Institute, there are approximately 23,770 new cases and 16,050 deaths from brain cancer each year.

Brain tumors are assigned a ‘grade’ (I through IV, or 1-4) denoting their microscopic appearance and level of severity. Grades are as follows:

III: Malignant cells look quite different compared to normal brain cells (‘anaplastic’). They spread to malignant cells faster than grade I and II.

Benign cells grow at a slower rate than malignant cells; however, benign cells located in vulnerable areas may be life-threatening and still require treatment. Some malignant tumors – though not all – respond promisingly to treatment (more on this later).

As mentioned, primary brain cancer originates in the neurological regions of the body. More specifically, brain tumors arise from multiple kinds of brain tissue, e.g. astrocytes and glial cells. Metastatic tumors form from cancerous cells that spread (metastasize) from other areas of the body.

Despite this knowledge, as with nearly every other type of cancer, scientists can’t pinpoint the catalysts of brain cancer. Scientific data do show that certain demographics are more at risk for developing brain cancer than others.

The following factors may increase the risk of someone developing brain cancer:

Children and older adults (ages 55 and up) develop brain tumors more than middle-aged adults and teenagers. However, anyone of any age can get a brain tumor.

There is scant evidence, but there could be a possible link between increased risk of cancer and exposure to some substances, such as solvents, pesticides, and rubber.

Men are more likely than women to develop a brain tumor, but women are more prone to meningioma.

It’s estimated that around 5 percent of brain tumors are attributable to a family history of conditions, including neurofibromatosis, nevoid basal cell carcinoma syndrome, tuberous sclerosis, Turcot syndrome, and von-Hippel-Lindau disease.

White adults are at a higher risk of developing brain tumors than adults of other races, sans certain types such as meningioma. Some of the ethnic differences in risk are striking; for example, northern Europeans are twice as likely to develop a brain tumor as the Japanese.

Exposure to ionizing radiation in a clinical setting (such as via x-rays) is a risk factor for developing brain cancer.

Studies show a link between head trauma and meningioma. Predisposition to seizures also appears to be a risk factor for brain cancer.

The Epstein-Barr virus, typically associated with causing mononucleosis (mono), is now thought to be a risk factor for CNS lymphoma. High concentrations of cytomegalovirus (CMV) have been discovered in brain tumor tissue. However, scientists caution that more research is needed concerning the potential link between virus exposure and the development of brain cancer. (3)

Is garlic the answer?

“Researchers generally agree that garlic, used for thousands of years to treat human disease, can reduce the risk of developing certain types of cancers.” – Cell Press (4)

(Note: While there indeed appears to be some potential benefits, it is necessary to conduct individual research prior to deciding on any treatment option.)

Researchers have been saying for years that garlic serves as a potent antidote to certain types of cancer. Besides allegedly neutralizing certain types of brain cancer, garlic has been found to reduce the risk cancers of the breast, colon, esophagus, pancreas, and stomach.

Scientists believe that the compound Allium sativum, or allicin, gives garlic it’s potent medicinal properties. Per a study published in the journal Vitro Pharmacology, allicin has potent antioxidant, anti-inflammatory, antifungal, and antibacterial characteristics. Researchers in the study also note the inhibitory effect of allicin on the brain membrane proteins, aquaporins, which play a critical function in the development of brain cancer. It was this inhibitory action on aquaporins which led to scientists to conclude that “allicin can be a potent target specific treatment for brain cancers.” (5)

In one study, researchers at the Medical University of South Carolina (MUSC) discovered that yet another a compound in garlic – diallyl trisulfide (DATS) – is a potential weapon against glioblastoma. Glioblastoma is the most aggressive type of brain cancer, with a life expectancy of just around 14 months.

The MUSC study, published in 2013 by the Journal of Neuro-Oncology is perhaps the one that makes the best case for the development of drugs with garlic compounds. In the lab, the DATS compound was found to reduce the size of glioblastoma tumor cells by 60 to 74 percent. Currently, the most effective drug used in the treatment of brain tumors, Avastin, produces a response rate of half that: just 30 to 40 percent.

Dr. Arabinda Das, lead author of the study, says of these findings “When you get a response that cuts the tumor down by that sort of percentage, I can’t stress how exciting it would be if that would translate to a clinical truth. (The study) showed the efficacy, and it was quite stunning.”

The DATS compound developed by Dr. Das is thought to work by obstructing the pathways used by a large portion of tumor cells to proliferate. Glioblastoma cells are the most aggressive type of cancerous cells precisely because of the multiple channels they use to invade healthy tissues of the brain. “In a nutshell, (glioblastoma cells) have a lot of strategies … to evade the body’s immune defense treatments, evade the treatments that we may give, and most importantly, develop a resistance to the treatments that we give,” says Dr. Pierre Giglio, a neuro-oncologist at MUSC and co-author of the study. (6)

While researchers continue to study the anticancer benefits of garlic further, we could still begin taking garlic as a preventative measure. Even the National Cancer Institute (not an institution that particularly cares for alternative-type treatments) admits that garlic likely helps to prevent cancer. (See the above quotation.) 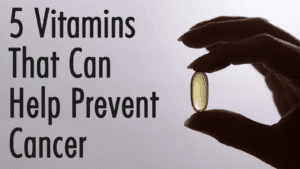