Remember, you don’t forgive someone for his or her sake – you forgive them for your sake. ~ Stephanie A. Sarkis, Ph.D.

A Lesson from Friedrich Nietzsche

The German philosopher Friedrich Nietzsche once likened forgiveness to weakness. Insisting that “God is dead” and that we are all sheep-slaves, it’s quite clear that Friedrich was a ‘tad’ more cynical than is considered healthy (a typical demeanor of philosopher-scholars.)

Had the great German philosopher understood the effects of stress on the body and mind, the end of his life may have come under slightly more favorable conditions. Nietzsche’s relentless pessimism, obsessive pursuit of “truth and inquiry,” and tireless work habits almost certainly contributed to his most unfortunate demise.

Mr. Nietzsche eventually suffered a complete mental breakdown and loss of all cognitive faculties at the age of 44. He then spent the rest of his life in a near-catatonic state in the care of his mother before dying of syphilis.

Like many others, past, present, and future, Friedrich Nietzsche was chronically stressed out. His inner and outer lives were turbulent, and he was always fighting his own demons, not to mention the expectations of his uber-religious and demanding mother.

Why Holding Onto Negative Feelings Is Really Bad

Why do we hold onto feelings like anger, anxiety, callousness, frustration, irritability, malice, rage, and resentment? Usually, something unfortunate occurs, and we delay forgiving ourselves or someone else – sometimes for life. While allowing a bit of bitterness to brew under the surface may not seem all that bad, it’s toxic to our physical and mental health.

To illustrate this point, let’s consider the effects of stressful events in early childhood – a time in one’s life that is supposed to be carefree and joyful. In an article titled “Early Childhood Stress Can Have a Lingering Effect on Your Health,” Dr. Joseph Mercola writes:

A study revealed impaired immune function in adolescents who experienced either physical abuse or time in an orphanage as youngsters. Even though their environments had changed, physiologically, they were still responding to stress. How the immune system develops is very much influenced by the environment.

The notable words within the above passage are: ‘physiologically; they were still responding to stress.’ As in, there is no longer a threat, but the body is still reacting as if there is. Both medical experts and laymen refer to this as being “wired for stress,” and this wiring kills people. 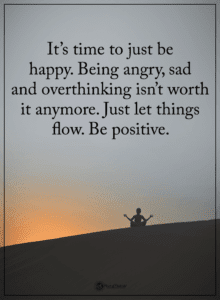 Dr. Mercola is referring to trauma – the end-result of prolonged exposure to stress. Mercola goes on to explain that childhood trauma causes lasting physical changes in the developing brain.

To be clear, environmental stimuli are (typically) more impactful for a child than an adult. However, this is not always the case, as combat veterans and other adult victims of trauma diagnosed with PTSD show.

In short: although the nervous system and immune system development slow as we age, changes do occur throughout life. Holding onto feelings that bother us – which our body perceives as nothing more than chronic stress – can lead to mild to severe physical and mental health conditions.

The Effects of Chronic Resentment

Chronic resentment, which is another way of saying chronic stress, can kill you. Consider that over 90 percent of all doctor visits are for stress-related health complaints.

Per the American Psychological Association (APA), “Chronic stress, or a constant stress experienced over a prolonged period of time, can contribute to long-term problems for the heart and blood vessels. The consistent and ongoing increase in heart rate, and the elevated stress hormones, (and elevated blood pressure)can take a toll on the body.”

WebMD lists the symptoms of long-term stress as follows:

Neurologically, long-term resentment can lead to a decrease in the production of new brain cells. Emotionally, the individual will likely become more emotional and forgetful.

While we may tend to ignore the physical signs of resentment, according to the late neuropharmacologist Candace Pert, “the body is your subconscious mind. Our physical body can be changed by the feelings we experience.”

Self-forgiveness is essential for self-healing. ~ Unknown

If you are harboring feelings of anger and resentment, it is crucial to understand that your subconscious mind is in a state of continuous (perhaps low-level) stress. This “background stress” can take its toll on your body and mind.

With that said, it’s enormously beneficial to practice forgiveness. Remember, forgiveness implies that you’re making peace with the pain and trying to let it go – it is something that you do for yourself.