Many people suffer from digestive distress – in fact, between 10 and 30 percent of the U.S. population struggles with Irritable Bowel Syndrome! Common IBS symptoms and gut ailments include excessive or foul-smelling gas, constipation and/or diarrhea, abdominal pain, belching, and heartburn. (1.)

Even healthy people experience occasional GI woes. But symptoms that interfere with someone’s quality of life can signal a deeper issue. An imbalance in beneficial vs. pathogenic gut bacteria is often the culprit behind digestive issues. There are several telltale signs that might manifest when it occurs.

WHAT IS THE GUT MICROBIOME?

“Gut health” is an extremely popular buzzword in the wellness community. Peruse any holistic living blog or health influencer’s Instagram page, and you’ll likely find several posts about this trendy topic. Sensationalism aside, what exactly does it all mean?

Over ten trillion microbes, or tiny organisms, have resided in our intestines since the beginning of time. Most of these bacteria are located in the colon, with only about 10,000 populating the small bowel. All human beings have about one-third of the same microbial profile, the remaining portion varying from person to person. (1.)

Gut microbes play a crucial part in almost every bodily function. Most people are aware that our intestinal bacteria govern digestion. After each meal, the organisms extract and assimilate essential nutrients while turning the remnants into waste. A lesser-known is just how many other responsibilities these microscopic bugs have when it comes to maintaining our overall health. Their jobs include:

Approximately 70% of our immune system is located in the gut. Intestinal bacteria communicate with immune cells and control how the body responds to infection.

Research suggests the central nervous system, which is responsible for brain function and gut microbiome are intricately related.

An infant study showed that decreased microbial diversity points to type one diabetes. It also discovered that certain pathogenic bacteria became more populous just before diagnoses. Post-meal blood sugar varies widely across the population even after consuming the same food. This could be partially due to differences in gut bacteria.

Most neurotransmitters, such as serotonin and dopamine, are actually located in the digestive tract rather than the brain. The two organs communicate with one another via the gut-brain axis, meaning mental and gastrointestinal wellbeing are related. Not only does food we eat have an overarching effect on our mental health, but stress also impairs digestion.

The gut microbiome plays an integral role in keeping HDL cholesterol and triglycerides at optimal levels. Certain strains of gut bacteria produce TMAO, a chemical in red meat that contributes to blocked arteries. An excess of TMAO can lead to catastrophic health events such as myocardial infarction or stroke. Conversely, other species such as Lactobacilli may lower LDL cholesterol.

Many studies have link an association between obesity and an unfavorable balance of good and bad microbes. Mice implanted with an obesogenic microbiome gained more weight than those receiving bacteria from a lean mouses. That’s despite their consuming the same diet.

While this is by no means an exhaustive list, it outlines just how important the gut microbiome is for all aspects of health. Now that we have made that point clear, let’s talk about some of the worst things a person can do for their gut health. 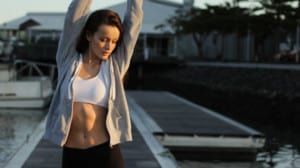 6 OF THE WORST THINGS FOR OPTIMAL GUT HEALTH

1 – Only eating a handful of different foods.

Diversity in the gut microbiome is considered healthier than just having a few strains. This is because different species of bacteria have their own methods of protecting against harmful influences such as antibiotics.

Drinking too much alcohol is associated with gut dysbiosis. Beverages such as gin make beneficial bacteria less prevalent. However, red wine consumption (in moderation) proves useful in overall digestive health. This disparity is likely due to the polyphenols present in wine.

Antibiotics are vital for conditions such as strep throat and urinary tract infections, but they can have detrimental effects on the microbiome. These powerful drugs eradicate both good and bad bacteria, and levels can remain suppressed for years. Taking antibiotics can temporarily increase the population of harmful bacteria such as

Regular movement has many systemic health benefits, including a positive effect on gut bacteria. The microbiomes of athletes harbor more butyrate-producing organisms, butyrate being a short-chain fatty acid crucial for overall health. People who exercise also have higher levels of Akkermansia, a microbe that helps regulate metabolism and prevent obesity.

Just like the brain, the gut also adheres to the circadian rhythm. Disrupting that biological clock by getting inadequate sleep can increase the prevalence of bacteria associated with weight gain, type 2 diabetes, and fat metabolism.

Stress is impossible to avoid in the modern world, but developing strategies to manage it is crucial for maintaining a healthy gut. In rodent studies, excessive stress increases pathogenic bacteria while decreasing beneficial populations.

Each day, we all take actions that can influence our intestinal health either positively or negatively. Since most people eat upwards of three times per day, food choices are some of the most powerful decisions a person makes.

6 TELLTALE SIGNS YOUR GUT IS UNHEALTHY

1 – You have an upset stomach.

Symptoms such as excessive or foul-smelling gas, bloating, constipation and/or diarrhea,  heartburn, and belching may point towards a deeper issue. A healthy gut microbiome should not have extreme difficulty processing food.

Experiencing weight loss or gain despite keeping the same dietary and exercise habits could be a sign that your gut health is subpar. Dysbiosis can lead to malabsorption, blood sugar dysregulation, and/or fat storage. Weight loss is a hallmark symptom of SIBO, or Small Intestinal Bacterial Overgrowth. Gaining weight, on the other hand, can indicate insulin resistance or unrelenting hunger due to malabsorption.

The gut is the body’s primary producer of neurotransmitters such as serotonin that help regulate our circadian rhythm. It makes sense, then, that an unhealthy gut and sleep disturbances often go hand-in-hand. (2.)

4 – You’ve been struggling with skin issues.

Skin irritation is often a surface-level manifestation of deeper issues such as a gut imbalance. Poor diets and food allergies can contribute to “leaky gut,” or intestinal permeability. This condition involves certain proteins spilling out of the gastrointestinal tract and entering the bloodstream. Consequently, inflammation ensues and may cause skin disorders such as eczema.