Gluten sensitivity or intolerance is a condition that causes a person to react after ingesting gluten, a protein found in wheat, barley, and rye. Symptoms vary widely and can include gastrointestinal problems, joint pain, fatigue, and depression. – WebMD

It is quite common for people to experience digestive and health problems from eating wheat or gluten. Found primarily in wheat, barley, and rye, gluten intolerance can result in a number of different symptoms.

Wheat is a type of grain that you will often find in bread, cereals and pasta. Less-common sources include condiments, such as salad dressings and soups. Barley is another abundant variety of grain, used often in brewing and stock feed products. Rye is the last type of grain that contains gluten. You might find rye in cereals, beer and bread. Consuming these types of foods and beverages is often how one discovers their intolerance to gluten.

Celiac disease is a serious type of gluten intolerance. Classified as an autoimmune disorder, celiac disease causes damage to the small intestine. When those with the disease consume gluten, it initiates an abnormal immune response that directly attacks the intestines. Eventually, damage caused to the intestines significantly lessens the body’s ability to properly absorb nutrients. If not properly treated, celiac disease can result in long-term health complications. It is estimated that 1 in 100 people suffer from the disease.

Individuals that are sensitive to gluten often find that their symptoms reside after the product is eliminated from their diet. With that said, certain symptoms exist that may show an individual is intolerant to gluten.

Here are 8 signs of gluten intolerance:

In an article titled Gluten sensitivity as a neurological illness, published in the Journal of Neurology, Neurosurgery and Psychiatry, researchers discovered abnormal reactivity to gluten in a class of antibodies known as immunoglobulin (IgG). In fact, some believe that this reaction contributes to diminished cognitive performance.

Gluten-intolerant individuals that eliminate gluten from their diet are often able to revert back to a healthy weight level. 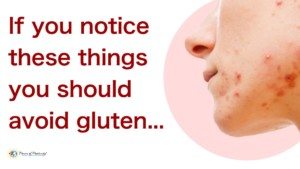 IgA antibodies, when one is sensitive or intolerant to gluten, have a counteracting effect on the immune system. Found primarily in the gastrointestinal tract and saliva, IgA antibodies are the body’s primary defense against colds, flus, and other illnesses. Obviously, when these same antibodies counteract our immune system, we’re much more likely to contract such illnesses.

In a study published in BMS Gastroenterology, a link was discovered between gluten sensitivity and “aphthous stomatitis” – a condition often associated with recurrent mouth ulcers and canker sores. Furthermore, due to malabsorption, gluten-sensitive individuals frequently have very low levels of calcium. Of course, that mineral is essential for oral health.

The malabsorption properties of gluten intolerance affect a number of different areas of the body, including our largest organ. Gluten has been linked to acne, psoriasis, eczema, and dermatitis herpetiformis (DH). Skin symptoms deriving from gluten intolerance often include burning, redness, rashes, itchiness, and even blistering. DH is a particularly damaging condition, defined by the Gluten Intolerance Group as: “a chronic disease of the skin marked by groups of watery, itchy blisters that may resemble pimples or blisters.