Health experts are always telling people to be careful about what they eat because it can affect the health of our bodies. We know this by now, no doubt! However, there are also foods that are harmful to the health of your brain.

“Your brain is the most important organ in your body. It keeps your heart beating, lungs breathing and all the systems in your body functioning. That’s why it’s essential to keep your brain working in optimum condition with a healthy diet,” says Elise Mandl, BSc, APD on Health Line.

Different foods have different effects on parts of our bodies. If you’re looking to ensure that your brain stays just as healthy as the rest of your body, avoid these specific foods – or, at least, eat them in moderation!

Here Are 8 Foods That Are Harmful To Your Brain

Avoid these foods to improve your brain health.

Processed foods aren’t easy to avoid these days, but it’s best to do so for both your body and your brain.

According to a recent study by a group of scientists, “Animal work over the last three decades has generated a convincing body of evidence that a Western diet – one high in saturated fat and refined carbohydrates (HFS diet) – can damage various brain systems… there is a causal link running from HFS diet to impaired brain function in humans, and that HFS diets also contribute to the development of neurodegenerative conditions.”

Foods that are highly processed are going to be full to the brim with sugar and salts. As we all know, eating too much of these foods isn’t good for you. Instant TV dinners, chips and sweets are the kind of processed foods that you’re going to want to avoid for the health of your brain.

Drinking alcohol in small amounts and moderation isn’t going to be harmful to your brain. However, it’s all about excess. When you drink alcohol every day, or drink alcohol in excess, you’re bound to be doing damage your brain as well as your body. Chronic alcohol usage can really do a number on your neurotransmitters, as well as brain volume.

A group of scientists have concluded that, “chronic alcohol use is accompanied by volume reductions of gray and white matter, as well as microstructural disruption of various white matter tracts. These changes are partially reversible following abstinence.”

It’s okay to enjoy alcohol every once in a while, but know when enough is enough!

When you eat fish, you always have a chance of that fish having something unsavory in its body, but usually it’s in small enough amounts that it isn’t a big deal. In fact, most doctors recommend eating a serving of fish once a week or more. However, predatory fish are more likely to be carrying mercury that can affect humans when they are eaten.

When ingested, mercury can affect the whole body, including the liver and brain. “The effects of mercury toxicity include disruption of the central nervous system and neurotransmitters and stimulation of neurotoxins, resulting in damage to the brain,” adds Mandl. Be careful about the fish your purchasing and from where, because mercury is no joke. Avoid shark and swordfish to keep mercury out of your body. 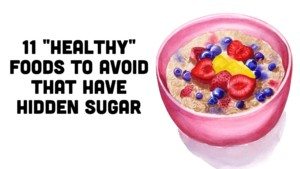 When health experts suggest a diet change for your health, the first thing to go is usually drinks that are full of sugar, like soda. Too much sugar and soda can cause negative effects in your brain, including causing diabetes that can increase someone’s risk for Alzheimer’s disease. High blood pressure from the sugar can also cause a risk of dementia later down the line. Kick the sugary drinks and soda and drink more water! Your body and your brain will thank you for it.

Sugars are what are known as “refined carbs”, along with things like white flour. Sugar is something that your body often craves when you eat it enough, and it can really spike your blood pressure. However, it’s also incredibly damaging to your brain. When you eat too much sugar, it can cause memory problems in both kids and adults.

Expert in osteopathic medicine, Christopher Calapai, MD says that sugar, “causes the hippocampus, the brain’s memory control centre, to become inflamed, meaning it can’t work at 100%.” Now, eating sugar once in a while isn’t a bad thing! But, like most things, you want to make sure you’re having foods high in sugar only in moderation.

A group of scientists have concluded that, “Sugar- and artificially-sweetened beverage intake have been linked to cardiometabolic risk factors, which increase the risk of cerebrovascular disease and dementia. Artificially sweetened soft drink consumption was associated with a higher risk of stroke and dementia.”

Sometimes, choosing sugar over artificial sweeteners is a good thing, but eating either/or in moderation will keep your brain safe.

Foods like bacon and other things that are full of saturated fats are usually pretty delicious. But, you want to eat them in moderation because saturated fats can make it difficult for your brain to fight against Alzheimer’s disease. According to this study, “Intake levels of both saturated and trans fat were positively and significantly associated with Alzheimer’s risk.”

Not only that, but saturated fats can cause your brain to have problems when it comes to forming memories. Bacon is delicious, but make sure you’re not eating too much of it!

It’s the end of the day, you’re tired, and you just want to run through the drive thru and get some dinner. We’ve all been there! There’s no shame in it. Unfortunately, fast food is a cocktail of unhealthy foods that you’ll want to limit the intake of, not just for your physical health, but for the health of your brain as well.

“Trans fats can get incorporated into the brain but they do not allow the signals to flow in the normal way. In layman’s terms, the brain gets thicker – and in practical terms it makes you thicker,” says nutritionist Patrick Holford.