Attributes of the Highly Creative

Highly creative people, or “creatives,” are perhaps among the most enigmatic people in existence. For hundreds of years, we’ve attempted – and mostly failed – to understand the likes of DaVinci, Mozart, Einstein, Michelangelo, and others. Despite these years of fascination, “gifted” seems the only trait which we laypeople universally attribute to creatives.

While there is no one trait that applies to every creative – or any person, for that matter – there are indeed personal attributes that apply more frequently to creatives than to others. This is according to Nancy Andreasen, neuroscientist, neuropsychologist, and Chair of Psychiatry at the University of Iowa Roy J. and Lucille A. Carver College of Medicine. Andreasen has been studying the complex minds of creatives for over 40 years.

Andreasen is known for her discovery of the relationship between manic-depressive illness and creativity.  She was also one of the first scientists to demonstrate brain abnormalities in people with schizophrenia and mood disorders.

Andreasen’s pivotal contributions included joining behavioral science with the technologies of neuroscience and neuroimaging in order to understand processes such as memory and creativity.

“Who would this book help? What if I channeled the effort and energy I’d invested in it into a career that might save people’s lives? Within a month, I made the decision to become a research scientist, perhaps a medical doctor.” – Dr. Andreasen, following the publication of her first book

Dr. Andreasen attributes her initial research interests to biographical similarities she shares with Sylvia Plath, a widely-admired, brilliant poet and novelist of the 20th century. Plath, who suffered from severe depression, tragically took her own life at the age of 30. Like Plath, Andreasen had received a Fulbright Scholarship and studied at a prestigious English University – Plath at Oxford, and Andreasen at Cambridge. Following Plath’s suicide, Andreasen began studying mental illness more intensely.

As Andreasen dug deeper into the creative geniuses of yesteryear, she found a correlation between mental illness and creative talent. Initially what caught her attention was the close proximity of mental illness to the likes of Albert Einstein, Bertrand Russell, and James Joyce.  All three had close relatives – Einstein, a son; Russell, many kin; and Joyce, a daughter – who suffered from schizophrenia.

But it was Andreasen’s work with Kurt Vonnegut, a prolific writer of the 1960s that would prove significant.

The life story of Mr. Vonnegut is rife with tragedy. His mother committed suicide on Mother’s Day – and while her son Kurt was on leave during World War II. His son, Mark, though highly functioning, was diagnosed with schizophrenia and depressive disorder.

Mark Vonnegut details his family’s struggles with mental illness in the books The Eden Express and Just Like Someone Without Mental Illness Only More So. Mr. Vonnegut writes, in part: “My mother, my cousins, and my sisters weren’t doing so great. We had eating disorders, co-dependency, outstanding warrants, drug and alcohol problems, dating and employment problems, and other ‘issues.’”

Though the Vonnegut family struggled with mood disorders, they were a creative bunch. Kurt Vonnegut’s father was an accomplished architect; his brother, a prodigious chemist who would go on to file 28 patents. His son Mark is, as noted above, a published author; and both of his daughters are talented visual artists.

“Those who have been eminent in philosophy, politics, poetry, and the arts have all had tendencies toward melancholia.” – Socrates

It is challenging – if not impossible – to prove that a link exists between creative ability and predisposition to depression. But Dr. Andreasen had seen enough creatives affected by mood disorders that she believed a case could be made.

In her 2008 study, published in the journal Dialogues in Clinical Neuroscience, Andreasen states, “The preponderance of the evidence suggests that in these creative individuals the rate of mood disorder is high and that both bipolar disorder and unipolar depression are quite common.”

Dr. Andreasen goes on to cite historical figures like Vincent Van Gogh, who committed suicide at the age of 37. Andresen notes – and both the historical and medical record seems to confirm – that Van Gogh suffered from periods of manic depression. Interestingly, Van Gogh produced most of his finest works in the last two years of life, a time when he “suffered from recurrent psychotic episodes,” in which “there are clearly bipolar aspects … followed by sustained periods of increasingly high energy and enthusiasm,” according to the American Journal of Psychiatry.

Andreasen notes that both creatives and scientists may be at a higher risk of anxiety, panic disorder, and alcoholism.

While most of Dr. Andreasen’s research focuses on the afflictions of creatives, she has extensively researched – and sincerely respects – many of their other qualities. Here are five other secrets of the creative mind:

A polymath is someone with multiple interests across a spectrum of subjects. “Star Wars” director George Lucas, for example, dabbles in architecture, anthropology, digital technology, history, interior design, neuroscience, and sociology. While many see the arts and sciences as opposites, creatives are much more likely to appreciate – and prove adept in – both areas of study. It isn’t uncommon to find a scientist with a creative streak writing poetry or painting – and vice-versa.

Steve Jobs, Bill Gates, and Mark Zuckerberg have one thing in common: all three are college dropouts. (How good must it feel to know that you’re smarter than pretty much everyone who tries to teach you something?!) Creative minds tend to loathe traditional institutions such as those in academia. As such, creative folks are more likely to seek out the knowledge that interests them and do away with everything else.

One frustration that creatives must contend with is the rejection of their ideas. Most successful authors and bestselling writers have faced rejection from multiple publishers before finding one that gave them a shot. Moreover, much of society tends to look down on those who attempt to make a living in the arts. College majors such as creative writing, drama, and fine arts are dismissed as worthless. The ignorance of many necessitates that creatives possess a good measure of resilience. Fortunately for us, they do. 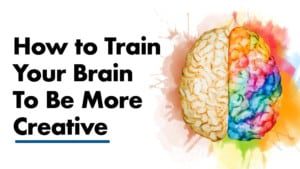 The acronym REST in this sense means Random Episodic Silent Thought. Andreasen describes this brain state in an article published in MS Monographs, “Neuroimaging studies … suggest that association cortices are the primary areas that are active during this state and that the brain is spontaneously reorganising and acting as a self-organising system.” Andreasen notes that nearly all of her clients claim to have their best ideas when their mind resembles this state.

One of her clients, an artist, says “A lot of (creative discovery) happens when you are doing one thing and you’re not thinking about what your mind is doing. I’m either watching television [or] reading a book, and I make a connection.”

While this last one might seem obvious, it can not be emphasized enough. Highly creative people often “have a zillion ideas,” according to a neuroscientist and inventor client of Andreasen. Unfortunately, many of these ideas aren’t practical when viewed from a commercial standpoint. However, it’s fair to say that creatives make up a good portion of a company’s R&D department.