What Do Your Fingernails Reveal About Your Personality?

In grade school, it used to be a joke that you would ask someone to look at their fingernails and if they turned their hand with their fingernails pointing toward themselves with their hand curled, it meant they were feminine. But if they looked at their hand with their nails pointing toward the other person, it meant they were masculine. Boys tried to catch girls doing this the ‘wrong’ way for their gender and vice versa and then used that as another reason to tease. Unacceptable bullying and nonsense aside, it turns out that fingers may have more in common with our masculinity or femininity than you might think.

Let’s look at some of the research on finger length and fingernail shape and what it means for our personalities.

Research by the Department of Psychology at the University of Alberta, Canada studied finger length in men and its correlation to mood. The researchers say that there is a clear reason for finger length being studied because ‘Finger length ratio (index to ring finger) is a sexually dimorphic trait found in a variety of species ranging from humans and mice to zebra finches.’

The research shows that on average, males have a relatively shorter index finger compared to their ring than females do. The theory is that the finger length ratios of the index finger and ring fingers are related to the amount of estrogen or testosterone that a baby receives in the womb during development.

The Canadian study also revealed that there was a connection between depression in men and the length of their fingers. They found that a more ‘feminine’ ratio of finger length was related to depression in men. Other studies have found a connection between a shorter index finger in men and ADHD symptoms, alcohol dependency, autism, aggressiveness, leadership, tendency to be a psychopath, and other traits. 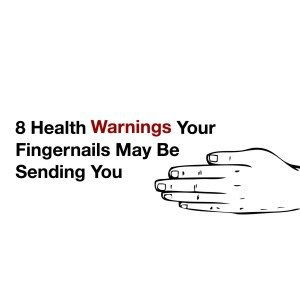 What your fingernail shape reveals about your personality

A study from the Dermatology Division of the Department of Medicine at the University College Hospital in Ibadan, Nigeria says the following about fingernail shapes and personality traits:

Anatomy of a fingernail

What we call our fingernail is anatomically the nail plate. The nail plate itself is made of the protein keratin, which is produced by the nail matrix near the cuticle of the fingernail.

According to Bianca Maria Piraccini, author of Nail Disorders: A Practical Guide to Diagnosis and Management, on average, fingernails grow about three millimeters per month. Nail growth slows as we age and is fastest in early adulthood.

Excessive filing, biting, or picking at your fingernails can be the cause of hand health problems. Often, these behaviors may be an outlet for extreme stress for a person. Nail-biting is a habit that children often outgrow by their early adulthood. Continuing to chew your nails may be a sign that anxiety or stress is becoming overwhelming to you and you need an outlet. In extreme cases, nail-biting can become an obsessive-compulsive personality disorder when thoughts of nail-biting and the need to chew them interfere with daily activities or result in a negative mood.