Since cardiac arrests are most commonly correlated with heart disease, people tend to think that the disease and arrests only affect adults. But, cardiac arrests are possible among children as well. In fact, more than 7,000 of cardiac arrests that occur each year in the United States are in children. More specifically, the majority of these cases where children undergo a cardiac arrest are by young athletes.

Although there are a great number of cases in which death occurs after a cardiac arrest, survivors of the arrests are forced to deal with additional, long-lasting complications of the arrest. For instance, survivors are likely to experience a multitude of medical issues, such as impaired consciousness and even cognitive deficits. Before we try to understand the symptoms, risks, and other cautionary information about cardiac arrests, we must first understand what cardiac arrests are and why exactly they occur.

Cardiac arrests occur as a sudden loss of functioning in the heart. They are usually unexpected and occur within a matter of seconds. Additionally, cardiac arrests can include a sudden loss of breathing as well as consciousness. That’s because of a lack of blood flow to the brain. Generally, they occur without warning, and if the affected individual isn’t treated immediately, then the likelihood of death is a plausible result.

Cardiac arrests and heart attacks are often confused with each other because of the similarities in their symptoms, but they also differ when it comes to their results as well as their mechanisms. More specifically, an arrest occurs when there is an electrical issue in the heart that results in the heart beating irregularly. This then leads to the heart stopping altogether, which means that cardiac arrests are more severe than heart attacks. On the other hand, a heart attack occurs when an artery is blocked and a portion of the heart is now deprived of blood that’s containing oxygen.

If a cardiac arrest occurs for too long without treatment, the affected individual will die due to lack of blood flow to the vital organs of the body. Similarly, when someone has a heart attack, the part of their heart that has been deprived of blood begins to die if the affected individual’s heart is not treated immediately as well. Typically, heart attacks cause an increase in the chances of someone undergoing a cardiac arrest within sometime in the future (2).

The underlying, ultimate cause of cardiac arrests is an irregular rhythm of the heart. The heart’s irregular beating becomes unable to withstand the ability to distribute blood to the rest of your body. Aside from this, there are more specific instances that can cause the heart to beat irregularly and then lead to an arrest.

An individual’s risk of receiving an arrest is heightened when they’ve had a heart attack in the past because heart attacks can result in more scar tissue being present in the heart. When there’s a large amount of scar tissue, then the electrical communications in the heart are forced to move around the scar tissue, resulting in there being an irregular heart beat and an arrest.

Cardiomyopathy is defined as a range of several diseases that the heart can have. But all of these diseases have the same condition in that they enlarge the heart. Not only this, but they may also be responsible for making the heart either rigid or thick. This results in the heart becoming weakened, and then it will only be able to pump small amounts of blood as it becomes larger. When the heart only pumps small amounts of blood in addition to being weak, then the beating rhythm of the heart can be affected, resulting in cardiac arrests.

Coronary artery disease is a condition in which cholesterol clogs your arteries, which then results in a lesser amount of blood flowing to your heart. When the heart is not receiving enough blood from the body, then it doesn’t have enough in return to pump out. This then results in an irregular heartbeat, and it risks cardiac arrests in the future.

Valvular heart disease occurs when the valves of the heart are either thinning out or leaking, which then results in the heart muscle becoming larger. When the chambers of the heart become too large, the heart risks developing an irregular heart beat and rhythm, and even cardiac arrests.

There are cardiac arrest symptoms that you can look for before you have an arrest, and there are also symptoms that occur while you’re currently going through an arrest. Both are equally important to know, whether you’re at risk for an arrest or not.

Cardiac Arrest Symptoms Before an Episode:

Cardiac Arrest Symptoms During an Episode:

Clearly when you’re in an arrest yourself, you cannot personally do anything because you will likely be unconscious. If you feel as though you may go into cardiac arrest and you have chest pain or shortness of breath, then you’re advised to call 911 and explain your situation before it’s too late. But it’s also important that you educate yourself on what to do when someone else around you is experiencing an episode. First, you’re advised to call 911 immediately. If the affected individual is unconscious and has no pulse, you’ll need to find someone certified to do CPR on that person until professional help has arrived. If a doctor is nearby, you’re advised to confront them for help (6). 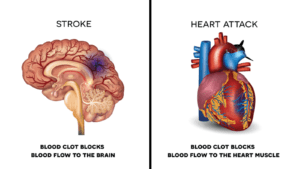 In order to reduce someone’s risk of going into an arrest in the future after already going through one in the past, doctors may prescribe medication in order to lower their blood pressure. In addition to this, the doctor may treat cardiac arrests with surgery in order to repair any damage that’s occured from previous cardiac arrests. Additionally, you’re advised to undergo dietary changes as well as engage in exercises to reduce your chances of going into an arrest again in the future.

Regardless of whether someone was treated properly or not for an arrest that they’ve previously experienced, there are still possible complications that can occur after the arrest has taken place. For instance, when a cardiac arrest occurs, there is a limited amount of blood that travels to the rest of an affected individual’s body. Since the heart stops beating, the vital organs of the affected individual’s body are deprived of blood flow.

Because of this, it’s common that when an unconscious person has undergone a sudden arrest for too long without treatment, their brain received too little blood flow. This can be problematic because when blood is restricted from traveling to the brain, then brain damage can likely be the result of the restricted blood flow. Consequently, many survivors of cardiac arrests will most likely show common signs of brain damage.

In order to prevent additional cardiac arrests from occuring in the future, affected individuals are advised to attend regular checkups with a doctor specialized in heart health. Not only this, but you’re also advised to go through regular screening for heart disease in particular. Lastly, you’re also recommended to change your current lifestyle to a heart-healthy lifestyle.