Today almost twenty percent of the population meet the criteria for some form of depression. Of course, that does not mean people who are temporarily feeling the blues and will be better next week, but depressed people who are having real difficulty functioning in life.

“Count every fifth person you see on the street — that’s how many people in your community may be suffering from depression. I think we need to understand the connection between adult depression and children’s behavior.” – Richard O’ Connor, Ph.D.

The number of people suffering from depression has reached epic proportions, and the problem only seems to be getting worse.

Take long work hours. Then combienthat with increased responsibility, little time to relax, mountains of debt, poor diet, no time to exercise, plus other stressors. As a result, you have a recipe for disaster. Unfortunately, this list of stressors applies to most people today, and the end result is usually underlying negative emotions, which can lead to depression and other mental health problems.

However, depression is not just environmental – it’s also genetic. This is why children of depressed parents have a much higher likelihood of developing depression themselves. In fact, according to a study that appeared in the December 2011 issue of Pediatrics, 25% of children with two depressed parents had emotional or behavioral problems.

In this article, we’ll discuss typical behaviors of adults who had depressed parents so that you can get the help you need if you suffer from depression, or watch for the signs in your loved ones.

8 Behaviors People Who Had Depressed Parents Display As Adults

Understanding the cycle of depression is the key to ending the harm.

Because of their reoccurring or even constant depression, adults who had depressed parents often attempt to drown their feelings out with drugs or alcohol. According to the Anxiety and Depression Association of America, “about 20 percent of Americans with an anxiety or mood disorder such as depression have an alcohol or other substance use disorder, and about 20 percent of those with an alcohol or substance use disorder also have an anxiety or mood disorder.”

The substances might temporarily ease depressive symptoms, but in the long run, studies have shown that drugs and alcohol make the mental illness worse.

Because parents with depression are more likely to disengage from others and spend more time alone, the child may start to mimic this behavior once they reach a certain stage of development. This can easily carry over into adulthood if the child doesn’t have any adult influences other than his/her parents.

According to an article on NCBI, “depression is significantly associated with more hostile, negative parenting, and with more disengaged (withdrawn) parenting.” Because parents may not provide the emotional support the child needs, the child himself starts to withdraw because he feels either neglected or is mimicking the parents’ behavior. 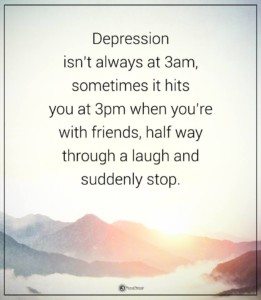 Depression makes it difficult to have steady relationships with others. That’s because the person simply doesn’t have the energy to keep up with the relationship. Also, social anxiety often occurs comorbidly with depression, which can hinder adult relationships even further. If the parents don’t have many friendships outside of their marriage, they tend to spend more time at home. As a result, they might smother the child, which can lead to an unhealthy attachment.

Furthermore, the child may display difficulty making friends, and this can carry over into adulthood as well.

Adults who had depressed parents usually have low self-confidence because they were never taught how to develop their own personalities. According to Michelle Sherman, Ph.D., a clinical associate professor of psychology at the University of Oklahoma Health Sciences Center in Oklahoma City, children of depressed parents might even blame themselves for their parents’ depression. This, along with negative parenting, can lead to low self-esteem and trouble maintaining a sense of self.

Healthy parents normally support a child’s endeavors and encourage them to go after their goals. However, a disengaged parent with depression might not have the ability to be there for their children emotionally. Indeed, this parent can hinder a child’s performance. Because the child doesn’t have the parents cheering them on, they may not perform to the best of their ability. Consequently, that can lead to problems in school and the workplace later on.

6. Loss of interest in life

People with depression tend to lose interest in things they once found enjoyable, and if parents display these behaviors, children may begin to withdraw as well. This can lead to a distorted sense of self, as the child doesn’t learn what h/she likes or dislikes, or may not have the confidence or willpower to try out and stick with new activities.

According to an article on NCBI,

“Trouble concentrating and making decisions, as well as other symptoms, may emerge as early signs of depression in the children and have the strong potential to interfere with intellectual and academic functioning, while associated school failures may independently increase the risk of depression.”

Children who have difficulty concentrating in school who don’t get treatment for depression have a greater likelihood of displaying these symptoms as adults. This behavior, once again, can be attributed to disengaged parenting.

Not surprisingly, adults who had depressed parents may not learn effective coping skills for stress. Thus, they may develop other mental disorders, such as anxiety. The adult may feel that he or she is inadequate for dealing with everyday life. Therefore, he or she may start to withdraw from many activities as a result.