Chickpea is one of the healthiest foods in existence. An annual legume, chickpea originated in the Middle East and Asia. It is a key ingredient in popular Indian dishes such as chana masala and hummus. Also, chickpeas are a popular addition to foods like curry, salads, soups, and stews.

In this article, we’re going to discuss 10 things that scientists say happens to your body when you eat chickpeas every day. First, let’s delve a bit into the interesting history of the chickpea.

Chickpeas are the earliest known cultivated legumes, dating back 8,500 to 10,800 years. Chickpeas are commonly referred to as garbanzo beans. Types of chickpeas include Egyptian peas and Bengal (India) grams.

The two families of chickpea are the Desi and Kabuli. The former is smaller and varied in color. The latter is the larger type and a light tan color. About 75 percent of global chickpea production is of the desi variety.

The chickpea plant grows upwards of 20 inches (50 cm) in height. The plant sprouts white flowers with veins that are blue, pink, and violet in color.

There are several varieties of chickpea, each growing in different parts of the world. The Cicer reticulatum, for example, grows only in southeastern Turkey. In contrast, a more abundant chickpea – the desi chana – is found throughout South Asia, Africa, and Mexico. (India produces approximately 61 percent of the world’s chickpeas.)

Slowly but surely, the chickpea “craze” that’s been going on for millennia overseas headed West. Per Google Trends, U.S. internet searches for “chickpea” reached 100 – the highest possible – in January of ’19.

Chickpeas are usually boiled in culinary settings. Dried chickpeas require a much longer cooking time (up to two hours) than other chickpeas. Other varieties can be pressure cooked or brought to a quick boil.

Cooking uses of chickpeas are various. Here are a few:

– South Asia (including India) considers chickpea a culinary staple. They utililize this legume in falafel, hummus, Dhokla (a steamed chickpea snack), and other dishes.

– Portugese dishes call for chickpea as an ingredient in the popular dish Rancho à Portuguesa. They also pair it with meat, pasta, rice, and sausage.

– In Spain, cold chickpea is used to make salads and tapas.

– Italian cuisine features chickpea as a flour and uses it as a batter.

– Egyptians use chickpeas as a garnish for a popular dish called kushari.

“Like other legumes, such as beans, peas, and lentils, chickpeas are high in fiber and protein, and contain several key vitamins and minerals.”~ Medical News Today (source)

Chickpeas are exceptionally nutritious. Just one cup of cooked chickpeas contains 15 grams (g) of protein and 13 g of dietary fiber.

The United States Department of Agriculture (USDA) shares  the nutrition information for chickpeas per 100 g serving (in grams):

10 Things That Happen To Your Body if You Eat Chickpeas 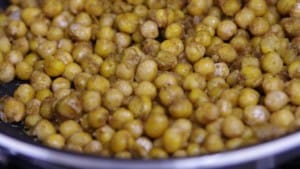 Metabolic syndrome (‘MetS’) is an assortment of symptoms that increase the risk of chronic disease. And, these include type 2 diabetes and heart disease. Symptoms of MetS include abdominal obesity, dyslipidemia (a cholesterol imbalance), hyperglycemia, and high blood pressure.

MetS has become an epidemic, with an estimated 20 to 27 percent of adults in developing countries showing signs.

Chickpeas are very high in fiber, and fiber intake is directly correlated with a lower risk of metabolic syndrome. Per a metanalysis of 14 studies published in the journal Nutrients, an inverse relationship was found between dietary fiber intake and all MetS symptoms.

The Dietary Guidelines for Americans recommends a minimum of 21 to 25 grams (g) of fiber per day for women and 30 to 38 g per day for men.

Normal levels of the minerals calcium, iron, magnesium, manganese, phosphate, and zinc support bone health. As detailed, chickpeas contain all of these minerals in varying amounts.

The proper bone structure requires a certain ratio of calcium to phosphorous. This ingredient strikes this balance quite well. Bone growth and development necessitates adequate levels of the minerals iron, manganese, and zinc.

The dietary guidelines for vitamin K is 90 µgm (micrograms) per day for women and 120 µgm for men.

Chickpeas are very low in sodium (7 g/100 grams). For this reason, including the legume as a side dish can help promote healthy blood pressure.

Chickpeas are also rich in potassium (291 g/100 grams). Potassium helps stabilize blood pressure as dilating the blood vessels. This is a process known as vasodilation.

Apparently, we Americans are quite bad at both regulating sodium intake and getting enough potassium. The dietary guidelines call for less than 2,300 mg of salt daily. According to the FDA, the average American eats about 3,400 mg.

The recommended daily intake for potassium is 4,700 mg per day. Most of us are nowhere close. Per a study published in The American Journal of Clinical Nutrition, Americans eat just 1,755 mg per day.

Per a study published in Journal of Food Science and Technology, sitosterol possesses numerous other health benefits. Evidence suggests that sitosterol has anti-inflammatory and anti-cancer properties. It may also stabilize blood sugar levels and reduce blood lipid levels.

Per a 26-study metanalysis out of the University of Toronto, eating a single serving of pulses lowers LDL (“bad”) cholesterol by five percent. Researchers cite the low glycemic index and slow digestion of pulses as two factors that contribute to this effect.

Per a university news release, “most people in North America would have to double” their current meager intake of pulses to realize these benefits. Case in point: just 13 percent of Canadians consume pulses daily.

Eggs yolks contain the highest concentration of choline at 680 mg per 100-gram serving. Per a 2009 paper published in the journal Nutrition Reviews, the average intake of choline is “far below” the “adequate intake” levels as recommended by the Institute of Medicine.

One benefit of dietary fiber is that it regulates digestion. Chickpeas and other pulses also help to prevent constipation.

Finally, the legume stimulates the release of pepsin A in the stomach. Pepsin is one of the primary digestive proteins in the human body and is instrumental in healthy digestive function.

So, if you have not guessed, chickpeas are great for keeping off the pounds. This is because the high content of dietary fiber in chickpeas creates a feeling of satiety (fullness).

Additionally, the body digests chickpeas much slower than most foods. This slowed digestion means that this full feeling lasts longer. As such, one is less likely to experience cravings for sweets. This fact in important since chickpeas are so efficient in regulating blood sugar levels.

In a 2016 study published in the journal Nutrients, researchers note that chickpeas – among other foods – that are “high in fiber, low in energy density and glycemic load, and moderate in protein” are “particularly important for weight control.”

Chickpeas contain a variety of antioxidants. These include beta-carotene, phytonutrients, and polyphenols. Per a 2008 study published in the journal Food Chemistry, the antioxidant makeup of chickpeas is remarkably effective at inhibiting oxidation. This means that they destroy the free radicals which damage our cells.

These are a good source of the mineral manganese. Because of this mineral, the legume enhances skin health and reduces the signs of skin aging. A natural antioxidant, manganese may work by negating the damaging effect of free radicals (e.g., pollution).

In a 2010 study published in the journal Nutrition Research and Practice, manganese and other antioxidant minerals were found to be imperative for proper moisturization of the skin.

Eat your fill of this legume! Adding chickpeas to your diet has multiple benefits. Indeed, you’ll look great and feel even better.