Overactive Bladder (OAB) is a widespread condition that affects millions of people globally.  According to the Urology Care Foundation, OAB affects over 30 million Americans. This number is likely to be much higher. Counting those who experience intermittent OAB and those who’ve gone undiagnosed, estimates rise to a whopping 30 percent of men and 40 percent of women.

Symptoms of OAB include:

The risk factors of OAB are various. They include age-related physical or cognitive decline, neurological diseases such as dementia (e.g. Parkinson’s), and obstruction of the bladder from constipation, enlarged prostate, or surgical complications. They can also be caused by nerve damage to the urinary region, neurological disorders such as multiple sclerosis and stroke, bladder stones or tumors. Prescription or over-the-counter (OTC) medications that increase the amount of urine production may also be a factor.

Without further ado, let’s delve a bit into the five leading causes of OAB:

Okay, so this one doesn’t sound too insightful – but it’s true. Many of us have a terrible habit of holding our pee for way too long. (Which is not a good idea, by the way!) Habitually clenching your bladder muscles can lead to the worsening of OAB-like symptoms. 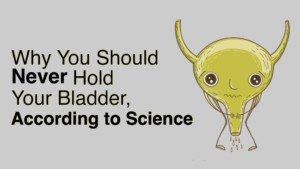 Diuretics are often prescribed to treat high blood pressure and congestive heart failure. They are also used to relieve fluid buildup in the body as a result of congestive heart failure. While useful, diuretics soak up extra water and salt within the body to expel as urine. This can cause someone to need to make more frequent trips to the restroom.

It’s well understood that our brain loses a bit of its sharpness as we get older. As a result, it may become a bit harder for the urinary system to interpret signals from the nervous system, which may cause an overactive bladder. Cognitive decline is also a symptom of conditions like multiple sclerosis (MS) and stroke.

As many women reading this may attest, menopause has a way of screwing with hormones, including estrogen. Estrogen can suddenly drop during menopause, which can weaken the bladder muscles. This weakness may then lead to urine leakage, a condition known as incontinence.

Incessant urination is one of the symptoms of both type 1 and type 2 diabetes. The reason for this is that the kidneys of diabetics and pre-diabetics work harder to expel blood sugar. This effectively sends the kidneys into overdrive – and us to the bathroom.

Preventing and Fixing an Overactive Bladder

Prevention is always the best medicine. With this in mind, let’s first talk about some lifestyle choices that lower your risk of an overactive bladder.

The most important factors to preventing OAB are maintaining a healthy weight and getting regular exercise. A healthy body optimizes the functioning of the urinary tract and other vital organs. Further, an active lifestyle is the best way to counteract diabetes and obesity. Other prevention measures include limiting alcohol and caffeine, quitting smoking, and managing any known medical conditions.

Now let’s say you’re struggling with a bit of OAB. Are there measures you can take to counteract it? Many signs point to “yes.” One noteworthy finding reported by Harvard University showed that 70 percent of women who used alternative remedies reported being satisfied with the treatment. These treatments might include supplements, herbs, and therapies.