Ask Gunner Hoggard why he wanted to publish a book, and he’s not shy to tell you–he wants to raise money to combat Perthes Disease. For the brave seven-year-old, making people aware of this condition is a priority. This child is a beacon of positivity. As if raising money weren’t enough, Gunner had a second goal. He wanted to be sure that other kids like him got the message that they are not alone in battling the debilitating rare disease.

Yes, Gunner has Perthes Disease. But, even though he must do things a little bit differently than other children, that does not hold him back from living life to the fullest.

His story of positivity is one that will inspire you. 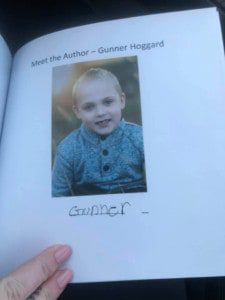 What is Perthes Disease?

Here’s a brief definition of Perthes Disease, according to the Perthes Kids Foundation, a 501C3 organization leading the way in creating awareness.

“Perthes disease is a rare childhood condition that affects the hip when blood supply to the hip bone is disrupted, causing bone cells to die, which erodes the hip and causes pain in the process.” —Perthes Kids Foundation

This condition is rare, impacting only four or five per 100,o00 children.

The foundation also reveals that so far, researchers have no cure to offer impacted children. Nor do they know the cause.

Although the painful inflammation is debilitating, it is not life-threatening. Furthermore, children have resilient bodies. Therefore, once the erosion of the bones stops, they can often recover some of the bone loss.

It impacts children to different degrees. Gunner can walk sometimes. However, more prolonged activities with his parents and siblings mean Gunner uses a wheelchair for many outings.

Gunner’s mother, GiGi Hoggard, shared,  “He has good days and bad days, good weeks and bad weeks. You just never know with this stuff. He needs his wheelchair for long walks because if he overworks it…it starts to hurt from inflammation.” 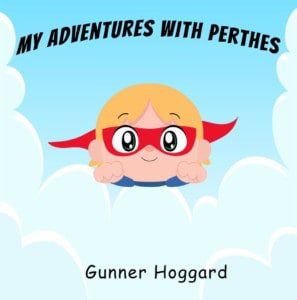 What Motivates a 7-Year-Old Child to Write a Book About a Rare Disease?

Gunner copes with pain beyond what most people can imagine. Yet, he keeps a positive attitude and wants to comfort other kids who face challenges with Perthes Disease.

He thought long and hard about how to spread the message of hope to other children who face the same diagnosis. His solution was one that most children his age would not consider. He wrote and self-published a book, My Adventures with Perthes. In the children’s book, Gunner shares how he found his inner strength to learn to cope with the pain he endures. And, he candidly explains how he overcomes feeling left out of participating in activities he once enjoyed.

When asked why he found it so necessary to share information about Perthes Disease with the world, Gunner explained his mission.

“To raise awareness on something so rare. Maybe with my help, more research can be done to help kids like me.”

He also emphasized his other goal, “to help other kids like me that can’t do ‘normal’ kid things.”

Not only is Gunner raising awareness, but he’s also putting his hard-earned money where his mouth is. Gunner donates $1 of every book sale he makes on Amazon towards that much-needed research.

Final Thoughts: Gunner Hoggard Is the Embodiment of Positivity

Gunner Hoggard is a brave 7-year-old coping with a disease for which there is not a cure at this time. However, instead of feeling sorry for himself, he did the extraordinary and decided to become part of the solution.  Perhaps Gunner’s mother sums up Gunner’s accomplishment best,

“His ability to turn such a life-altering situation into something positive make me beyond proud of him.”

We, too, are proud of Gunner’s ability to spread a message of comfort to other children and help raise the research dollars needed to help combat this rare disease