There are only two possible explanations. First, they’ve reached a sort of rock-bottom, and don’t want to care anymore. Second (and far more likely), they wouldn’t knowingly do these things!

Yet, sabotaging oneself happens all of the time – and our own mind is often to blame.

Check and see if you identify with any of the following thoughts:

Self-sabotage most often happens when we lack self-belief, we fear failure, or when we fail to exercise self-discipline. Indeed, we can be our own worst enemy.

Once again – and this is a critical point – YOUR MIND IS THE CULPRIT.

Here are five potential signs that someone is unintentionally sabotaging themselves:

“You will never have a greater or lesser dominion than that over yourself … the height of a man’s success is gauged by his self-mastery; the depth of his failure by his self-abandonment.” ~ Leonardo da Vinci

Procrastination is perhaps the most prominent saboteur of human beings. Making a habit of putting things off that one deems hard, boring, or otherwise unpleasant is as ubiquitous as it is personally damaging.

The solution is simple but, of course, not easy. And that is to be mindful of what you’re doing – no matter if the task is big or small. Be mindful of personal points of struggle; identify the behaviors and triggers which prevent you from completing a task or goal. 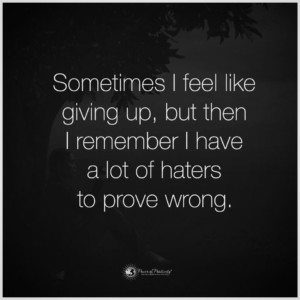 Overspending is a consequence of deeply ingrained subconscious programming. People who overspend place too much emphasis and importance on instant gratification, and not enough on the long-term good that comes from being financially diligent.

Breaking the habit of overspending is hard because it’s so entrenched in the subconscious. The urge to spend is overwhelmingly strong because the human mind is wired to put instant gratification first.

The undeniably tricky solution is multifaceted: know your spending triggers and avoid them, track every dollar spent, and – perhaps most important – resolve to be financially free.

3. They Focus on the Negative

While we all have an innate negativity bias, people who always seem to sabotage themselves are almost always more negative than most. Have you ever seen the Saturday Night Live skit “Debbie Downer?” Well, Debbie, played brilliantly by Rachel Dratch, takes every positive situation and manages to turn it into a depression-fest.

The solution is to make a note of your negative thoughts when you’re not feeling particularly good about things. Then, challenge yourself on each of these thoughts based on the evidence; the odds are that there’s not much substance to these self-defeating patterns of thought.

Audrey Sherman, Ph.D., writes: “Although it appears to be a mundane sort of thing, I find disorganization and chaos to be one of the biggest problems reported by depressed and anxious individuals. Emotional baggage has a way of building up, and then expressing itself in an outward display of turmoil — as if a tornado had let loose in your brain and your surroundings.”

Disorganization can create problems in just about every area of our life, personally and professionally. Biologically, disorganization creates stress – and stress chemicals create irritability and panic.