“I think we are all insecure, and there is nothing wrong in accepting that. But the problem arises when we try to counter this insecurity by cultivating this illusion of control, and we start taking ourselves and everything we know too seriously.” – Sushant Singh Rajput

It’s very easy to get bogged down in the trap of insecurity and start showing insecure behavior. After all, the whole world around us teaches us that we’re never good enough, no matter what we do with our lives. This is a dangerous mindset to get yourself into, and it’s doubly dangerous if you’re in a relationship with someone who’s insecure.

There’s a very fine line between recognizing insecure behavior and genuine affection. In fact, there are several certain signs to look out for with which men can display their potentially insecure behavior and personality. Those are not always easy to pick up on. You have to remember that no matter how insecure your boyfriend or husband is, it’s not your job to remedy that. Insecurity is only made better with positive reinforcement of the self. Here are the warning signs to look out for – and what they could mean for your developing relationship.

1. He tells you he loves you only two dates in

Has he professed his undying love to you after your first date? Is he asking to move in after the third time you’ve been together? If so, that’s a sign to run in the other direction. He’s too insecure for his own good and he believes that if you don’t commit to him straightaway, then something horrible will happen. This sign is very difficult to recognize because normally, someone telling you they love you is wonderful – but not after knowing you for a week. Make sure to trust your instincts and recognize it as a sign of insecurity rather than honesty.

Body language can sometimes speak louder than words. Insecure men have a really hard time maintaining eye contact. That’s because eyes can be very expressive to someone’s inner world. When a man is insecure, he doesn’t want you to see that. Whether it’s during intimacy or over dinner, avoidance in eye contact is always a big red flag.

Bullies are often just insecure, very deep down, yet they channel it through insults or verbal and physical violence. That is, of course, no excuse for them treating you badly. If you experience any form of abuse or bad treatment, know that such treatment is never acceptable. You may consider directing your partner to a counseling service, so they can tackle their issues directly. Do not let them continue to take it out on you. Also, never be fooled by the tough persona – it’s the deep insecurity that’s plaguing him.

4. He threatens to leave you

Another very important sign of insecurity is that he believes he has an enormous influence on you, so much so that he’s threatening to leave. This threat probably indicates that he fears you’ll leave first and wants to save himself the pain. He’s also demanding the validation that he desperately craves from you – using manipulative methods to get it.

Does he question you when you stay late at work or go out with your friends? Extreme jealousy is a classic sign of insecurity. Again, it stems from the fear that you will leave him before he can do anything about it. He doesn’t feel like he’s good enough for you, so he’s trying to avoid getting hurt the only way he knows how – by hurting you first. Don’t let it fool you. Try to look past this manipulative tactic to see the insecurity lurking beneath.

If he’s constantly comparing himself to your other male friends, or to male celebrities you like, then it’s very likely that his self-esteem is suffering. This one is probably easier to fix than the other ones, because his insecurity is tied to his physical appearance. Try to arrange a “makeover” day for him if you can. Encourage him to treat himself to some nice clothes, a new haircut, a shave with a nice razor. Even those small things will do wonders to fix the way he feels about himself.

One of the tell-tale signs of a healthy relationships is getting past petty fights and learning from your mistakes. If the man in your life has a habit of holding grudges, then it’s very likely that he’s suffering with insecurity about your relationship. Try to convince him to let bygones be bygones and focus on the present rather than the past arguments you’ve had.

8. He’s everywhere on your social media

Does he like every single thing you post on Facebook or Instagram? It’s likely that it’s not just because he’s a fan of your content; it’s possible he may be digitally stalking you. He may see himself as an online detective and thinks he knows everything about you from your social media. Be careful what you share on there, and let private things be private. 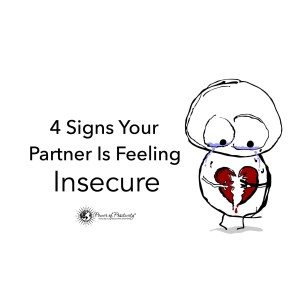 If you find him reading your texts, going through your browser history, or looking through your messages, then it’s very likely that he’s suffering from extreme insecurity. He’s trying to catch you out “in the act” of leaving him, so that he doesn’t feel as bad if it actually happens. Try to tell him how that makes you feel – and explain to him that you, like any other person, need your privacy and he needs to respect that.

A couple’s life doesn’t revolve around their relationship; it’s crucial that both people have a life outside of it. If he’s being obsessive about you going out and leaving him alone, it means he doesn’t trust you or your connection. Don’t make him feel uninvolved, but also convince him that you need your own time where you can focus on yourself.

Very often, insecure men don’t realize that they are revealing insecure behavior. They can be very difficult to help, but with the right approach, you can build your partner’s confidence and make him feel more comfortable in your relationship. If necessary, seek professional help from therapists and experts. You’ll definitely see a change in attitude once positive thinking replaces the negative thoughts!