You can tell a lot about infant health by the color, smell, consistency, and frequency of their baby poop. Although soiled diapers are one of the less pleasant aspects of having a newborn in the house, it is necessary that parents keep an eye on what goes in them and learn how to interpret what they see.

Learning what is and is not a healthy bowel movement will help parents to catch possible health problems and diagnose illnesses.

Some illnesses don’t have obvious symptoms. Fevers, vomiting, rashes, and swelling are all undeniable signs of disease, but coupled with runny, off-colored, or infrequent bowel movements can change the diagnosis. What seems like an infection can, in fact, be a food allergy. And what may seem like a little gas or crankiness can, in fact, be a severe medical condition. Tracking and observing your child’s bowel movements will help you give your doctor the tools they need to make an accurate diagnosis.

So what is a healthy bowel movement, and how often should your baby be pooping?

For the first week or so of the child’s life, you should have a dirty diaper for every day of life.

Going forward, the size, consistency, and frequency of bowel movements will change as your little one’s digestive system and a diet change.

Infant health doesn’t have to equal a bowel movement every day or even several times a day. As long as the bowel movements are soft and pass comfortably, the baby is gaining weight normally, and there is no apparent discomfort, you don’t need to worry. Skipping a day or two is normal. This is true for babies who are breastfed, bottle-fed, or a mixture of both.

As for texture, breastfed babies tend to have looser stool. It may be seedy or look curdled like mustard-colored cottage cheese. Formula-fed babies usually have more well-formed stools.

The first few diaper changes can be surprising. The poop may be dark or black in color and sticky like tar. These first bowel movements are called meconium and are a sign that your newborn’s brand new digestive system is working. After a few days, the bowel movements should change in color and consistency. They will still be dark in color but seedy or grainy in color, especially if you are breastfeeding exclusively.

Again, this is entirely normal and healthy. After about a week, the stool will change back in color and texture according to your child’s diet.

Breastfed baby poop is usually yellow, green, or brown and resembles cottage cheese or paste. It is generally pretty loose and can be confused with diarrhea. Unlike formula-fed babies, breastfed infants’ poop is sweet-smelling at first. Don’t worry, the odor will come, but not for some time. Breastfed babies poop more, on average than their formula-fed counterparts, though the frequency of their bowel movements decreases significantly during the first three months.

As your infant begins to eat food, you may see bits of undigested food in their stool. Sometimes food travels through the digestive system so fast that the body doesn’t have time to break it down properly. In some cases, your child simply can’t yet digest the food properly.

In either case, there is no need for you to be alarmed. Don’t be surprised if, after introducing them to a new food, their stool comes out the same color or smelling like the new food.

Infants who take iron supplements will often have dark green poop. They will also have green poop as they are introduced to solid foods, especially iron-fortified cereals.

Green poop may also be an indication of an imbalance of hind-milk and fore-milk when breastfeeding. Fore-milk is low in fat and high in sugar. It is the first milk that your breast releases when you breastfeed. If your infant has short nursing sessions or if you switch breasts too quickly, your infant’s poop can come out green and frothy.

Food intolerance can also lead to green poop. If your infant is using a milk-based formula, consider switching to a non-dairy formula.

These are standard colors for poop. They may vary widely in shade, from a tawny brown to a bright, mustard yellow. Sudden changes in the color of the poop are no cause for concern. It could be caused by changes in their diets as they are introduced to new foods.

You may find small bits of dried, black blood in your infant’s poop. This is usually caused by small amounts of blood digested with breast milk. Often, this happens when the mother’s nipples are cracked or bleeding.

There is no reason to be alarmed, although you may want to consult a lactation specialist to make sure there isn’t an underlying problem.

However, this shouldn’t be confused with melena, which is thick, black, tarry stool that occurs after the infant is three months old. This is blood in the bowel movement and is an indication of bleeding in the digestive tract. This is a severe problem, and you should call your doctor right away.

Diarrhea Is A Severe Threat to Infant Health

Diarrhea is a simple issue to address and treat. However, for infants, delayed treatment can be fatal. One of the leading causes of infant mortality worldwide is diarrhea. The loose and runny stool causes the infant to dehydrate. Most Diarrhea is caused by allergies or infections. While it is essential to address the underlying causes of diarrhea, it is also important to treat the loss of fluids and electrolytes caused by diarrhea, itself.

Hard, pebble-like poop is a sign of constipation. The most common causes of constipation are food allergies or lack of tolerance for an ingredient in the infant formula you use. Some children will also become constipated as they are introduced to new foods.

Poop can turn red if you have introduced red foods to your child’s diet. Strawberries, beets, tomatoes, and even fruit punch can all become the stool red.

Barring that, red stool with a healthy consistency could be a sign of a food allergy. Usually, that allergy is a milk protein.

Red poop that is watery or red diarrhea is a sign of a bacterial infection. Check with your doctor. 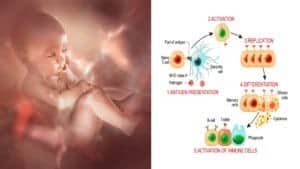 Mucus in the Baby Poop

The appearance of slimy streaks in your baby’s poop may be shocking but isn’t necessarily a problem.

The intestines naturally produce mucus to help stool pass through. Sometimes children pass some of that mucus when they move their bowels. Children who are recovering from a cold or the flu may have mucus in their poop. The same is true for children who are teething.

However, mucus in the poop is often a sign of infection. If it persists for more than a day, consult your doctor. 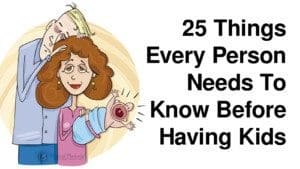 Having a healthy gut and regular bowel movements is as important for babies as it is for adults. The effects of poor digestive health or food allergies can compound quickly in children’s bodies, so it’s essential to educate yourself about warning signs. Healthy bowel movements are a sign of good overall health, and monitoring your child’s poop is part of maintaining their health and well-being.

Much of your immune system is found in your child’s gut and a healthy balance of bacteria in the child’s digestive system. The first one thousand days (or roughly three years) will establish the basis of your child’s overall health. The bacteria that colonize your child’s gut in the first few months will vary according to internal and external factors, including diet. Encouraging a healthy, reliable, and diverse colonization of microorganisms in the gut during the first year will set children up for healthier lives.

During the first few months of life, everything is changing rapidly, including the state of the baby’s poop. Knowing the full range of healthy bowel movements will help to relieve some of the anxiety. Keeping your doctor aware of any concerns you may have about your infant’s health or any deviations to the typical pattern is an important task.