Love is in the air!  The birds are singing, the sun is shining and everything in the world is glorious!  Ahhh … such is springtime.

Perhaps you have someone you’ve been keeping your eye on for a while, and now seems like a good time to act on your feelings toward your crush.  We each have our own way of behaving when we have a crush on someone.   Are you subtle, charming, and flirtatious … or a more direct type?

Our zodiac signs can often tell us things about ourselves that we don’t really think about or question.  When we are in “crush mode,” we are often either oblivious to our actions due to being on cloud nine or perhaps overly aware of our actions due to nerves.

Do you know how you act around your crush according to your zodiac sign?

How Do You Act Around Your Crush, According To Your Zodiac Sign?

An Aries man may be a bit slow in realizing he’s falling in love, but then it hits him like a lightning bolt.  One day he’s his usual friendly self, and the next day he realizes he’s falling for you.  When he does realize it, he has no qualms about letting you know.

An Aries woman tends to be a bit scattered and less focused during conversations when she isn’t thinking of you as more than a friend.  However, when she has a crush, she is glued to your every word.  She is sure to use her wit to question and respond back to you.  She will give you her undivided attention.

Taurus men are generally known to be fairly confident, traditionalist, and practical.  When they crush on you, though, they suddenly show their more sensitive side by being a little more awkward and nervous.  They may even make jokes which poke fun at themselves to demonstrate their willingness to show vulnerability.

Taurus women also are usually known for their strong confidence, until they have a crush.  Then, they suddenly are distracted and internally nervous if their crush is around.  They are careful to appear relaxed while internally going crazy.  They become more concerned about every detail of their appearance and behavior and analyze whether they should approach you or not.  Once they decide to talk to you, though, they start to calm down.

Gemini men want to get to know you more.  They go about this by asking random small questions, which become more personal over time after you are more comfortable, and a friendship or rapport has developed.  His actions and body language may appear contradictory, as he is flustered by you.  His words may be neutral but his body language is showing how he feels.

A Gemini woman is the woman who loves to be in love.  When she starts crushing, she cherishes those first feelings of excitement within herself for a period of time.  She may watch romantic comedies more often as a way of enjoying these strong feelings of “being in love.”  When she is ready, she will let you know her feelings.

A Cancer man is a romantic, sensitive soul who also likes to daydream of his crush.  He also loves the outdoors, so you may find him under a tree daydreaming. He has a very caring, nurturing way about him.  Making you feel special and cherished is his dream.

A Cancer woman may typically be a cautious, reserved person.  When she develops a crush, however, look out!  Her personality begins to shine like the sun.  She literally has a glow about her – complete with overwhelming charm, smiles, and fabulous happy energy.

Your Leo man who loves to flirt suddenly finds he likes you a little more than he wants to admit.  Now, he wants to watch you everywhere you go.  Then, when it’s time to talk to you, suddenly he becomes tongue tied.  He actually gets a bit shy and can’t look at you directly without getting flustered.  No worries here, though.  Leos are naturally confident and bold, so they won’t hesitate long before asking their crush out.

Leo women are somewhat opposite of their Leo men.  Naturally charming and confident, they turn it up a few notches when they are with the object of their affection.  She is quick with her jokes, wit, and conversation with even more lively energy and openness about her.

A Virgo man is cautious about his feelings.  He’s a great subtle observer of his crush without following her everywhere.  He wants to be sure of his feelings … and his chances.  He will have a hard time looking her in the eye, as he feels very vulnerable and is afraid his emotions will show too much.  It takes certainty on his part to act on his desire to ask his crush out.

A Virgo woman usually keeps her emotions under wraps.  This is no different when she has a crush.  She still plays it cool.  She observes and learns about her crush and then will do things that she notices he likes or places importance on.  Her goal is to get him comfortable with her first.  She is unlikely to ask him out herself.  Part of her plan is to make him feel comfortable enough to ask her out.

A Libra man becomes bolder and more confident in his actions, and since Libras already have a strong personality, it will become clear when they have a crush.  He becomes a bit more of a “show off” without being too arrogant.  He wants to get a woman’s attention while demonstrating that he can be everything to her.

Libra women become a bit less confident.  They aren’t necessarily comfortable with their feelings, yet they want to hang out with their crush.  Suddenly, she is more interested in group outings as camouflage to invite him along while she secretly is on cloud 9 just being around him.

A Scorpio man isn’t likely to fall quickly or easily.  Scorpios tend to guard their hearts and want to truly know the woman they are crushing on first.  For this reason, they tend to fall for a female friend they have known a long time.

A Scorpio woman uses clothing as a way of demonstrating her interest.  She will incorporate her crush’s clothing style into her own.  She’s not going to dress just like him, but maybe the style of the jacket he wears would look amazing with her short skirt and boots.

A Sagittarius man loves his freedom and play.  When he crushes, however, his warm, sensitive, generous side is shown wholeheartedly.  He willingly offers to do tasks for his object of interest without expectation of something in return.  His heart is open, and he will use his actions to show it by doing things for his crush just out of joy.

A Sagittarius woman wears her emotions on her face for all to see.  She may have a nervous habit of biting her lip or pulling on her hair to show her nervousness.  She is not afraid for anyone to know how she feels and is confident and sure of herself regardless.

The steady and true Capricorn shows he is crushing through subtle changes in his look, such as suddenly growing a beard or mustache, buying more colorful shirts, or maybe adding an edgy jacket.  He becomes the subtle peacock striving to get your attention.  That subtlety doesn’t mean he isn’t persistent, however, in striving to get someone’s attention.  They will look for multiple ways to engage with their crush. 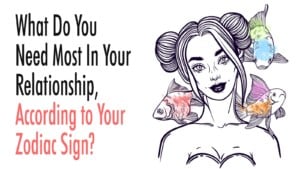 Capricorn women are essentially the same as the Capricorn men.  Their goal is to improve their looks while making it seem like they “just threw themselves together.”  She has the confidence to believe that her crush is already watching her, so she is just stepping it up to really get his attention.  She is the woman unafraid to strut her stuff!

The normally reserved Aquarius prefers to show his intentions through buying gifts.  He may start with little things like buying you lunch one day or picking up a little trinket or a book.  As time goes on, he will step it up into more lavish things in hopes that you will get the message.

The Aquarius woman is all smiles!  She is high on her feelings for her crush and the joy radiates from her face.  She couldn’t even begin to contain her feelings and doesn’t even try.

The Pisces man is not a cold fish when he is crushing.  He loves showing physical affection.  It will almost seem like you are a magnet to him; he’ll give slight brushes of the fingertips, a light rub of the shoulders, or a hug.  He’s not going to be creepy or inappropriate about it, but it is his way of showing you how irresistible he finds you, kind of like when you were in grade school and that boy behind you was pulling your hair.  Later, you were told he was doing that because he liked you.  He was probably a Pisces.  As he became older, he found nicer ways to show it.