Narcissism is everywhere, and according to a recent study, this number is increasing among Americans.  Despite many of the negative traits that are associated with this personality, Narcissists are still human beings that can change, and deserve concern.

Believe it or not, they have a genuine, medically-valid personality disorder called Narcissist Personality Disorder (NPD), which originates in childhood and can, unfortunately, without emotional healing,  leave a permanent void in a person’s heart.

You may know someone who acts superior to you yet craves your constant attention and admiration. This person could have a Narcissistic Personality Disorder (NPD). It’s important that you understand this condition. So what are some common signs of narcissism to best help a person before it’s too late?

According to the National Institute of Health’s article,  Narcissistic Personality Disorder in Clinical Health Psychology Practice: Case Studies of Comorbid Psychological Distress and Life-Limiting Illness, September 2017, “NPD is a psychological disorder characterized by a persistent pattern of grandiosity, fantasies of unlimited power or importance, and a need for admiration or special treatment.”

Researchers believe there are two types of NPD:  vulnerable narcissism and grandiose narcissism. They share some distinctive characteristics such as being egocentric with a puffed-up view of self and a deep sense of entitlement around others. But there are differences between the two types of NPD. 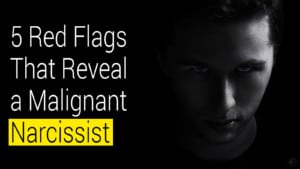 This type of narcissist shows insecurities, but at the same time exhibits criticalness and acts defensively. They may be overly sensitive. They crave being admired to feel better about themselves. If they aren’t recognized they pull back and become passive in the relationship. They tend to have low self-esteem, but then suddenly can be overly congenial and relatable. They have an adverse view of their past, often with bizarre renditions of their history.

A person with this type of NPD exhibits high levels of confidence and prefers to be in control. They see themselves as exceptional and superior to others. Thus, they elevate their achievements and portray themselves as the hero every time. They are aggressive, often exploiting others. An exaggerated view of their intelligence is quite common among those with grandiose NPD. You might hear the alternate term “malignant narcissism” for this mental illness.

8 Signs of Narcissism That Most People Ignore

All narcissists fake their exterior deliberately and skillfully. The odds are that this type has a better understanding of human psychology, and attempts to use this knowledge to their benefit. That’s why it can be hard to spot one, so we’re going to focus on the eight narcissistic behaviors that many people either (a) willfully ignore, or (b) don’t perceive.

Narcissism affects both the person suffering as well as the people around him/her. Here are 8 signs of narcissism that most people avoid until it too late…

Narcissists are infamous for simplifying or minimizing the needs of others. They don’t bother to explain the details of a situation (like when someone confronts them with empirical evidence of their condition).

People who suffer from NPD are thought to lack empathy and the ability to care. But studies show that they carry a huge amount of emotional bigotry combined with an exaggerated view of themselves. Because of this, they may lack the ability to show empathy or they are unwilling to show empathy.

Researchers in the study cited above found that both a willingness to show empathy and an ableness of show empathy could be present in someone with NPD. But these individuals may choose to withdrawal when they see the pain or distress of others. Others who suffer from NPD may have a flawed ability to understand other’s pain or feel as if they can’t handle it. They struggle to love and be loved because it feels like something they can’t control.

Don’t expect the narcissist to care about anyone or anything but themselves.

2. Narcissists have an inability to listen.

When a narcissist isn’t talking (a rare occurrence), they likely aren’t listening either. They’re all-too-eager to carry on nonsensically, but don’t expect them to tune in when it’s your turn to speak. Focusing on what someone has to say requires a bit of effort and energy, which narcissists aren’t willing to give.

If you know someone who displays narcissistic characteristics, you’ll notice their inability to listen to you. Your friend will enjoy talking more about themselves than listening to you. The person may dismiss what you say or brush your words aside as though they weren’t that important.  They may even be unwilling to listen to you at all.

Those who suffer from NPD will listen to someone whom they respect. But if they don’t respect you they will behave as such: 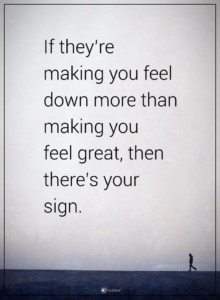 3. They have improper communication.

On a related note, narcissists are terrible communicators. They’re far too sensitive (read: frail) and take personal offense at the slightest perceived criticism.

They possess neither the need or desire to have a dialogue about anything that doesn’t benefit them. It’s common for narcissists to attempt to disguise their anger by not using words; instead opting to be passive-aggressive.

Someone with NPD makes communication difficult and even confusing at times. Narcissists use communication as a way to manipulate. They are prone to non-stop talking to prevent you from sharing your viewpoints. Additionally, they are tenacious at disagreeing, so much so, that you often give up even trying to talk. Watch as they use circular logic, coming back to their point over and over again, often confusing their listeners.

If you show any acknowledgment of their logic, they will jump on this, saying you agree with them and they’ll hold you to it. To say that it’s frustrating to communicate with a narcissist is an understatement. Those who suffer from NPD are often impulsive liars, but they often believe their own lies.

Suggestions for communicating with someone with NPD includes the following:

As you know, narcissists are masters at pulling other people’s strings. On this note, they will often display false humility to bait the admiration of others. Why? Because the more people are drawn to them, the more options the narcissist has to do what they do best: manipulate.

There is a big debate about whether narcissists can show real humility. Studies reveal that those with NPD realize they make a good impression on people they’ve just met in comparison to the people they’ve known for a long time. Their long-term relationships are usually rocky. Although they don’t see their own selfish behavior, they’re able to point out genuine selfish tendencies in another.

There can be a false show of humility by someone who suffers from NPD. They will pretend to be a victim, looking for you to encourage them and tell them they’re not that bad. This is really a desire for approval and a desire for you to reinforce their pride.

They can describe narcissistically characteristics in others better than in themselves. Some suggest that there are leaders who are narcissists but have the ability to show humble tendencies. These strong leader types have the vision and can still admit their weakness and mistakes. These individuals often make good leaders, presidents, or CEOs. 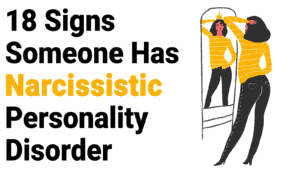 5. They show an absence of empathy.

Narcissists do not care about you. To them, you are just a means to an end. Of all outward signs of narcissism, a lack of empathy is perhaps the most commonplace. If you’re ever unsure about someone’s intentions, just attempt to solicit a bit of sympathy.

You won’t find any, and your initial hypothesis will be proven correct. More importantly, you’ll save yourself a bit of heartache and frustration.

It’s funny how some narcissists will brag about their smarts – doing so even if no one else agrees. They attempt to come across as a know-it-all but often end up making a fool of themselves.

Worse, narcissists are almost impossible to collaborate with, as they consider themselves so much smarter and more insightful. This isn’t to say that intelligent narcissists don’t exist – they most certainly do, but they’re smart enough not to broadcast it.

7. A sense of entitlement.

When it comes to wanting something, a narcissist will often act like a 2-year old who wants his bottle. The narcissist should have something merely because they want it – and this is the only criteria.

Researchers found that those with NPD feel entitled. They feel like they are an exception, often requiring special treatment. A narcissist will fight for perceived rights, demanding retribution. They are less apt to forgive but insist that others pay for the wrong they did. Their forgiveness withheld from others is justifiable in their eyes.

It goes without saying that narcissists have no concept of merit and are always looking for the easy way out in any given situation.

8. A never-ending search for happiness.

If there’s one thing to pity about a narcissist’s state of mind, it’s this: nothing can or will make them happy. Fame, money, power – you name it – it’s never enough. Perhaps another thing to pity: any ordinary individual will turn to their loved ones for real happiness, which narcissists cannot do.

Narcissists are self-important and arrogant, but surprisingly they tend to present themselves as happy. But studies show they often have physical, social, and mental struggles. Those with NPD have a high rate of drug and alcohol abuse, mood, and anxiety problems.

They tend to get depressed easily. Narcissists feel shame, self-anger, and have a higher frequency of suicide attempts. Those with NPD are likely to have health problems like heart disease or digestive disorders. So it would seem that those with NPD are looking for happiness, but can’t attain it. 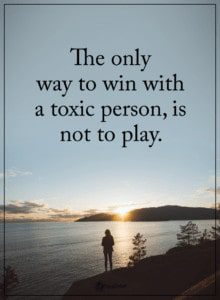 The article delivers some harsh words pertaining to the narcissistic personality. And some of these words are well-deserved from a personal point of view.

Again, it is worth remembering, however, that narcissists are human beings with a genuine, medically-valid personality disorder. More specifically, according to psychologists, narcissists are usually given too much attention or outright neglected during their early years. They’re programmed to behave as they do.

Narcissistic Personality Disorder is a very misunderstood disorder. If you know someone who you think may have NPD, it’s important to help them see they have a disorder. Encourage them to get help from a professional therapist or counselor.

Assure them of your support for them without giving in to their need for attention and affirmation. It may take years of consistent treatment to see change. You will need to be patient and stay strong as you relate to the person with NPD, but it’s worth it. Your friendship can make a difference in their total healing.

Most people will agree that emotional neglect is traumatizing, and experts agree. Whether we will ever reach a consensus opinion about being spoiled, however, remains to be seen. It’s also important to understand that – while we can respect a narcissist’s humanity – we needn’t subject ourselves to their behavior. Your emotional, mental, and physical health must come first.

Provided that we pay attention, think rationally, and not jump to conclusions, we’ll have a pretty good idea who the real person is underneath.