A separate study published by MarketWatch, a financial information website that provides business news, analysis, and stock market data, shows that the death rate associated with chronic liver diseases rose annually since 2000, affecting primarily those between the ages of 45 to 64.

Let’s further put this into context. The study ran from 2000 through 2015. Ultimately, it revealed that the death rate among individuals within this age group with liver disease increased by 31%.

WHAT YOU SHOULD KNOW ABOUT THE LIVER

Now we have a general understanding of the statistics as they relate to liver disease. So let’s take a closer look at the role of the liver when it comes to overall health.

The liver is a large organ. It sits above the gallbladder and works with the pancreas and large intestines to process, absorb, and digest food. More than that, it helps remove toxins from the body and also metabolizes medication, which it does by filtering blood from the digestive tract before allowing it to pass through the rest of the body. All in all, this organ carries responsibility for several critical roles in the body that predicate wellness.

Hepatitis A – This type of viral hepatitis can be caused by consuming foods or drinks that contain fecal matter or other dangerous toxins. Hepatitis A is especially common in restaurants where individuals who are responsible for prepping and cooking food do not wash their hands. While hepatitis A is usually asymptomatic and eventually goes away on its own after about 6 months, it can still potentially harm the hepatic organ.

Hepatitis B – This type of viral hepatitis is generally the result of exchanging fluids with others, such as engaging in unprotected sex or sharing infected hypodermic needles while using drugs.

Hepatitis C – This type of viral hepatitis occurs when infected blood makes its way into the bloodstream, which is a common occurrence among those who engage in drug use and share hypodermic needles. However, it is worth noting that those who work in the healthcare field are also at risk of being stuck with infected needles too. Also worth noting, symptoms of hepatitis C generally will not show up for years. As such, the infection can significantly damage the hepatic organ even without symptoms being present.

Along with viral hepatitis, there is significant evidence suggesting that certain autoimmune disorders can also give way to liver-related diseases as well, some of which include the following:

Primary sclerosing cholangitis – This autoimmune disorder not only blocks bile ducts in the hepatic organ but also causes it to become overworked. To further complicate matters, when bile becomes trapped in the organ, it can cause it to shut down, which leads to a higher chance of developing liver-related cancer. Unlike autoimmune hepatitis and primary biliary cholangitis, men are more likely to develop primary sclerosing cholangitis than women.

ADDITIONAL FACTORS THAT CAN CONTRIBUTE TO LIVER-RELATED DISEASES

Along with autoimmune disorders and viral hepatitis, being overweight or obese can also trigger liver-related diseases. The same applies to excessive alcohol consumption, which can lead to cirrhosis and eventually result in organ failure. In some cases, liver-related illnesses can come down to genetics. According to an article published by the Mayo Clinic, a nonprofit academic medical center based in Minnesota, an abnormal gene inherited from one or both parents can significantly increase the chances of developing one of the following liver-related diseases due to a build-up of toxins in the organ:

Although medication is designed to improve your health, some of them can have the opposite effect. For example, Tylenol and other drugs that contain acetaminophen can damage the hepatic organ if taken excessively. That said, if you’re taking acetaminophen to relieve chronic pain and you’re concerned about developing a liver-related disease, it would be a good idea to speak with your physician about being placed on an alternative medication.

It is important to note that this list does not represent all of the health conditions that can lead to non-alcoholic steatohepatitis; moreover, it is a list of the ones that are most likely to result in a liver-related disease.

Although they may take a while to appear, symptoms of advanced liver-related diseases are hard to miss, and you should be seen by a physician immediately if you start to experience any of them. That said, some of the more common symptoms include

While these symptoms may not always be indicative of a liver-related disease, they should be not be overlooked. This is especially true for those who may be experiencing symptoms commonly associated with liver-related cancer. One such indication is as dark-colored stool or urine, which is  a sign that the organ is no longer capable of removing toxins from the body. The earlier a doctor diagnoses and treats liver-related cancer, the better chance you’ll survive. To further illustrate this point, the 5-year survival rate for liver-related cancer that has not metastasized to other parts of the body is 31 percent, according to the American Cancer Society. 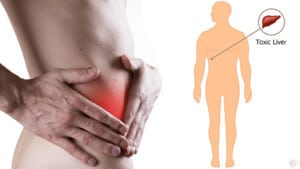 HOW TO AVOID DEVELOPING A LIVER-RELATED DISEASE

Most will agree that a liver-related disease can significantly jeopardize one’s health. However, you can do several things to lower your chances of developing this serious health problem. Primarily, it comes down to limiting your exposure to dangerous toxins and making better lifestyle choices. Some of those improvements include the following.