What exactly is mucus? Chances are, that if you’re sick and dealing with a persistent cough or a constantly blocked nose, you have an excess of mucus in your body. There are many different types of mucus that you can read more about, but what many people don’t realize is that we all have mucus in our bodies all the time. In fact, researchers agree that mucus is very important for all your bodily functions as it helps hydrate and nourish your skin and organs. However, when the body is dealing with an infection, there’s a chance of overproduction of mucus. At these times, you’ll be happy to know there are foods that flush mucus from your body.

Thickened mucus can be caused by many things such as congestion, infections, and the common cold but it can also be a sign of more serious conditions. Certain foods can also lead to increased production of mucus, so even when we’re healthy, it’s always a good idea to keep an eye out for them. Thankfully, there are many foods that flush mucus and cleanse our bodies in the easiest way possible. They are not only a positive way to detox but also wonderful to try if you’ve got a cold! Check out some of these healthy options of foods that flush mucus from our bodies.

Here Are 7 Foods That Flush Mucus from Your Body

“It is not always easy to stop eating the many acidic foods we’ve enjoyed for so long and have become addicted to but it can be accomplished through cleansing and nourishing our bodies with the foods the Creator has provided.” – Dr. Sebi

Whether it’s ginger tea, ginger candies, or grated ginger in your favorite curry – ginger has magical healing abilities because of its unique antioxidant ingredients. It’s also anti-inflammatory, signaling to your body that you’re getting treatment and that it doesn’t need to produce more mucus to fight off your infection. Even if you don’t like ginger, try to force yourself to eat some – perhaps in tea, or maybe mix it with turmeric for better flavor and even better healing abilities.

Whether we’re talking strawberries, blackberries, cranberries, elderberries – they are full of vitamin C and potassium, which work as fantastic antioxidants. Use them in smoothies, or just eat them raw. Their great detoxing effect is certain to decrease the overproduction of mucus in your body but the added fiber will also ensure that you get over your infection as quickly as possible.

Not a very common fruit that people turn to when they look for detox, but underneath the pineapple’s hard surface lies a plethora of sweet benefits. Pineapple contains bromelain – a protein that’s really useful in getting rid of mucus. In fact, pineapples are so effective that they’re often prescribed to patients after having sinus operations to get rid of mucus successfully. Have your pineapple fresh or blitzed up in a smoothie for best results.

It might sound unconventional, because it is. Pumpkin seeds are a very popular antioxidant in Chinese medicine, but for some reason, they didn’t make their way to us as a healthy additive until very recently. Having some pumpkin seeds while you’re ill will definitely decrease your mucus flow and help you breathe more easily. Besides, they’re crammed full of other yummy proteins and fibers, making them a healthy snack.

Even if the smell’s not that appetizing, onion and garlic are great against inflammations and toxins. There’s a reason why when you have a blocked nose, a whiff of garlic is enough to clear it. If you consume onion and garlic regularly, the results will be even better. These foods that flush mucus are good for your body in other ways also. So, cook them into all of your favorite dishes. For the best results, make sure to mash the garlic as that releases all of its healthy ingredients straight into your dish. 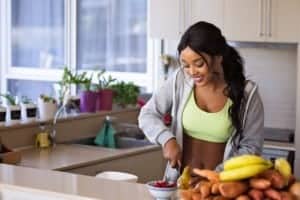 Just like berries, apples are crammed full of vitamin C, but they also contain potassium – a useful nutrient that’s great for reducing mucus build-ups. The good thing about apples is that potassium doesn’t disappear due to heat, so you can enjoy them in a variety of ways. They are particularly great in cakes and baking, but you can also blitz them up into a smoothie, chop them up in your muesli, or eat them raw. Apples also provide a great replacement for sugar in cakes and bakes!