Avoidant Personality Disorder: People that experience long-standing feelings of inadequacy and are extremely sensitive to what others think about them…leads the person to be socially inhibited and feel socially inept.

Our collective society is one that embraces people with good social skills, especially in more extraverted countries (e.g. the Western World). The reason is quite simple: humans encounter social exchanges in a number of areas – family, work, school, and so forth – early on in life. Therefore, it is important that we’re – on some level – able to effectively communicate with those around us.

That said, many people are unable or unwilling to engage others, despite any internal and external pressures they may face. The reasons behind such behaviors are quite complex – ranging from inherent shyness and withdrawal, to harmful and antisocial ideations.

Psychologists have studied social behaviors since the advent of modern psychology; there is even an entire discipline devoted to studying human interaction. As science has advanced, psychologists and other experts have been able to further substantiate the rationale that some people simply don’t have the capabilities to effectively interact with other human beings.

Why is this? Well, as one can imagine, human interaction is a complex topic – and is, in many ways, as enigmatic as psychology itself. This reading focuses upon seven behaviors and conditions that result in one’s inability to associate or connect with other human beings.

Quick note: You may realize, as you read through this article, that certain behaviors/conditions are indeed involuntary. As with myriad psychological conditions, many people simply remain unaware of their peculiarities. It is important to make such distinctions, as the perceptions we have of other people directly affect their life.

Here are 7 behaviors that keep people from making personal connections: 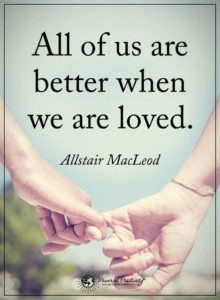 Apathetic people simply don’t have the inclination to engage with others around them. There are a number of reasons why this is the case. Certain medical conditions, such as depression, alter a person’s brain chemistry in a way that evokes withdrawal behavior. Of course, this is not the individuals fault, as the perceived apathy ties directly into their psychological state.

Introverted people (who make up 40 percent of the population) are wired to predominantly focus on their own thoughts and feelings; often, introverts are unaware of misperceptions that others may have concerning their lack of sociability. The degree to which one is introverted (most are a mix of introvert and extrovert), strongly correlates with supposed apathy.

Then, of course, there are individuals that simply don’t like people. And that’s an entirely different thing,

Egotistic people, by definition, place a disproportionate value upon themselves. Specifically, those with high degrees of egotism often believe that they’re “the smartest person in the room,” the most beautiful, or (ironically) desired by most. Egotists strongly believe that others want to be them, regardless of evidence to the contrary.

Needless to say, 99 percent of us find egotists repulsive. Not many people want to be around someone that drones on upon themselves while showing little interest to anyone or anything else. Truly, there are people among us that think they’re simply “better” or “more deserving” than the next.

There is another term for individuals that display egotism to a strong degree: narcissists.

A close cousin of egotism, self-absorption is the tendency to believe that “the world revolves around you.” In simple terms, self-absorbed people think of themselves first in almost every perceivable way. An example: your car breaks down and the self-absorbed “friend” is too, er, “busy” watching their favorite TV show to bother helping.

While not as outwardly apparent as egotism, self-absorption is nearly as damaging – to the person and their circle. It goes without saying, but others – at certain times – should come before our own needs and wants.

Sadly, these feelings have the tendency to remain – at some level – throughout life. It is too bad, since these people are often among the most kind-hearted, generous, and loyal people to associate with. The few close friends that know them best will often attest to this fact.

If self-absorption is a close cousin to egotism, aloofness is the second cousin of apathy. By definition, aloofness is the state of “being distant, reserved or indifferent.” Shy people that are difficult to know are more likely to be labeled as “aloof” than “apathetic”; they simply remain within themselves, as this is part of their personality.

Contrary to popular belief, aloof individuals are not “uncaring” or something similar. Aloofness does not have any ulterior motive, and doesn’t correlate with any negative disposition.

Again, some people are simply difficult to understand – nothing less, nothing more. Einstein was an aloof individual, for example.

To be “reclusive” is, by definition, to voluntarily avoid other people. At an extreme degree, some people will remain in their home (or room) for months – even years – on end.

Of course, this type of behavior is complex; it is not considered “normal” (or healthy) to remain in one constricted space for a long duration of time. That said, it is not always an easy (voluntary?) choice. Those that have become disfigured, for example, feel shame and/or embarrassment when facing others.

For other recluses, their behavior is the direct result of some psychological abnormality or trauma. Some victims of rape, for example, find it nearly impossible to withstand the constant fear when in an unsecure environment.

Certain people, for whatever reason, hold wide-scale, intolerant attitudes towards others. Often, this outlook develops throughout the stages of childhood and adolescence. Some “socially awkward” people, for example, innately feel inferior to others throughout their lives. However, some of these individuals learn intolerance of their own. Inded, they often direct it towards innocent people whom they know little-to-nothing about.

Of course, an intolerant worldview doesn’t get someone far in the social sphere. Intolerant people often hold negative attitudes, which most people despise.