Everyone who’s experienced a panic attack knows how hard they can be to handle. Hindsight is 20/20, and during an attack, it’s almost like you’ll never feel normal again. The next time you realize that you’re going to have a breakdown, don’t think that it’s too late to do something about it. You can always cope with them right as they rise within you that’ll help you lessen or even prevent it growing into a frightful experience.

Nearly six million Americans encounter panic troubles, and almost seven million endure General Anxiety Disorders. Each of these ailments usually grows into a full-fledged panic attack, and females are twice as prone to be affected by them as opposed to males. If you bear repeated panic attacks, or they’re random isolated events, or you want to know what to do if it happens for the first time, it’s good to understand the steps you can take.

Of course, breathing deep is one of the first things you’ll think of doing. Even though fast, shallow breaths feel like they are helping, it only hinders your efforts to overcome panic attack

Try to focus on how breathing naturally makes you feel good, as it’s one of our most vital needs. Begin with a four second inhale and just let your breath go for a count of eight. The important part is to allow the exhale to be as long as possible as this is what Herbert Benson says triggers our “relaxation response.”

Practicing yoga every day is one soothing, healthy approach to begin a deep breathing habit which is essential if you’ve had regular panic attacks in the past.
Try adding a simple 10 minute session of yoga or meditation each day to your schedule, so next time that you want to stop panic attack from occurring, your body knows how it can use deep breathing to calm the storm. 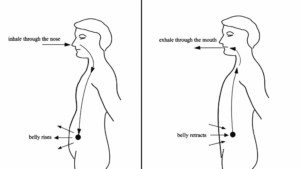 2. Hold onto something (stuffed animal etc.)

One typical sign that you’ll need to overcome panic attack is to become disoriented or confused. It’s hard to orient yourself, making your panic seem only to get worse. As you notice this starting to occur, the best thing to do is to “ground” yourself. For instance, maybe you’re standing upright as the panic sets in, locate something to physically latch onto, such as a doorknob or the back of a chair.

If you’re laying down as the attack is happening, it’s good to grab onto a smaller item such as your pillow, keys or anything you can hold onto within your reach and continue moving your fingers across it. Anything you can do to get yourself to feel that the moment is real will help you get through the most uncomfortable times faster.

As unusual as it may seem, using ice cubes to calm down panic attacks is a tried and true method. Grabbing onto an ice cube forces your brain and body to concentrate on how uncomfortable the ice is rather than the panic.

This will ultimately divert you from your panic and continue to reduce the attack until it’s completely stopped. Test how shifting the cubes from each hand works for you if you’re able to adjust to cold fast.

As absurd as it is to advise that you give working out a shot during a panic attack, moving around can help alleviate stress and panic attacks. This isn’t to say that the next time you have a panic attack is an excellent time to complete an entire workout but get in a short walk or just take a quick shower. Do a physical activity which serves to liven up your body and thus your mind to keep you occupied.

It’s good to note as well that numerous studies show how regular exercise can create a 20% reduction in people’s symptoms of anxiety as opposed to people that do not train. Even if it’s something you hate, the long-term effects are astronomical and will support you with your mental and physical longevity.