Our eyes are very important. The sensory input they provide is a part of most people’s lives, and for many, it’s not something they can imagine living without. This is why it’s a good idea to make sure you’re giving your eyes the positive care they need and to take note when something might be wrong with them. Sometimes the smallest symptoms that you might be tempted to dismiss could be a sign of something much more serious. Here are some signs from your eyes never to ignore.

“Eye care is not just about buying glasses. Many eye conditions are hereditary so regular check-ups will ensure that problems are caught early.” – unknown

Here Are 5 Signs From Your Eyes To Never Ignore

One of the most commonly experienced and ignored signs, blurry vision can be caused by a lot of different things. The most common is when the eyes develop farsightedness or nearsightedness, or essentially when the vision stops being a perfect 20/20. All this means is that it is time to get corrective lenses, such as contact lenses or glasses. Ignoring the need for corrective lenses can cause difficulty in everyday life and carelessness that can be potentially dangerous.

Blurry vision might also be a side effect of migraines, but it can also be a symptom of diabetes or even a stroke – as well as a long list of other more serious health issues that can eventually lead to blindness. Sudden, seemingly unexplainable blurry vision is always a serious cause for concern and should never be ignored.

Essentially, there is a lot that could be wrong when your vision is blurry. There’s nothing wrong with having some positive thinking, but assuming it’s nothing can be dangerous. Going to an optometrist for blurry vision is never a bad idea – even if all you leave with is a pair of new glasses!

The body sprouts new spots all the time, and it isn’t necessarily a cause for concern. If you look into the mirror one day and notice a mole in your eye that wasn’t there before, don’t panic! Instead, do pencil in an appointment with your eye doctor just to have it looked at.

In most cases, these spots are just that – spots. They’re harmless and only affect the appearance. But sometimes, in rare cases, these moles can become malignant and lead to melanoma, which will then cause blurry vision, detachment of the retina, and eventually, blindness.

The unfortunate part is that there are some moles, freckles, and specks that will appear at the back of the eye, meaning you won’t be able to see them. Still, malignant moles and melanoma in the eyes from such things is very, very rare, so as long as you are regularly attending your optometrist checkups, you’ll likely be fine. When you notice these specks appearing, though, it’s always better to be safe than sorry, so have new moles checked out.

Eye pain or eye pressure – known medically as ophthalmalgia – can be nothing, but it can also be a sign of more severe health issues. In minor cases, this can just be from a form of a sinus problem, which happens because full sinuses will press against the eyes, causing pressure. Eye pain might also be caused by headaches and migraines.

But there is a more serious condition that could be causing this ophthalmalgia, and this condition is known as glaucoma. The issue happens when the eye experiences too much pressure building up. Without proper diagnosis and treatment, this degenerative disease will eventually lead to optic nerve damage and, finally, blindness.

If you notice that you are experiencing pressure or pain in your eyes, see a doctor immediately. Even if it isn’t glaucoma, the risk is too big to take. On top of that, there are other conditions that could be causing eye pain, so having the problem checked out is never a bad idea.

The moisture levels of the eyes say a lot about what is happening in them. Dry eyes, especially, can indicate a lot of different problems. It can be due to dry eye syndrome, where enough tears are not produced enough. With this issue, tears also end up evaporating too quickly. These problems lead to inflammation and foggy vision. Some autoimmune diseases can also cause dry eyes. If you’re noticing other strange symptoms around your body alongside this dryness, see a doctor. 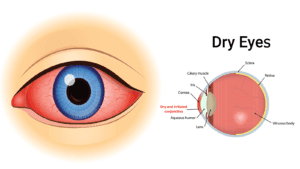 On the other hand, eyes that are too wet most of the time might be a sign of issues with the tear ducts. This sort of problem prevents the eyes from properly draining themselves of excess fluid. While this isn’t serious, it can be annoying and debilitating. Thankfully, minor surgery is sufficient to fix it.

Floaters are a perfectly normal and typically harmless side effect of … well, having eyes! Floaters are caused by a release of collagen strands from the very jelly-like vitreous body in the back of the eye. As you age, the jelly becomes less firm, eventually leading to these little specks of collagen making their way across the eye.

These floaters usually resemble small shadows in vision. They happen to everyone, but you should not ignore a change in the way your floaters appear. If your floaters suddenly begin to develop a cobweb-like appearance, increase in size, stop vanishing on their own, or are accompanied by flashing vision, visit a doctor immediately. This could be a sign of something called vitreous detachment. This occurs when the aforementioned vitreous body begins to separate from the eye’s retina.

In addition, if you’re noticing more floaters than normal, taking a trip to an optometrist won’t hurt. This advice especially applies if they have started to make vision difficult. A special treatment can help to fix this problem, temporarily replacing the vitreous body and allowing a new, healthy kind to regrow.