The Anxiety and Depression Association of America (AADA) reports that 40 million adults in the U.S. suffer from depression. That number represents over 18 percent of our adult population. Many people cover up the root cause of depression with prescriptions and other medical treatments that may cause additional issues.

Some cases of depression do need professional medical treatment, even if temporary. However, if you suffer from depression, you’ll be happy to know that you can often approach treatments for depression with safer, and effective options that you can start right now.

These five natural treatments for depression will help you combat depression in a positive, healthy way:

For many years, researchers have studied the correlation between exercise and depression. As a result, they found the regular movement of the body to aid in healing depression in most cases. Most psychologists recommend some sort of aerobic exercise at least three days a week for twenty to thirty minutes at a time. Regular exercise can cause the neurotransmitters in your brain to rewire themselves. Additionally, they might have a positive effect on your serotonin levels.

Many people who struggle with depression do not produce enough serotonin, which helps you feel relaxed. However, exercise will naturally boost serotonin, as well as release endorphins, which minimize stress and give feelings of happiness. If you don’t have a regular exercise routine, consider joining classes at the gym where you will have an opportunity to socialize and surround yourself with supportive people.

A team of researchers at Johns Hopkins University in Baltimore, Maryland, found that just thirty minutes of daily mindfulness meditation could have a more substantial effect on anxiety and depression than antidepressants. Meditation calms the nervous system and helps you become more aware of your thoughts and feelings. Mindfulness meditation, in particular, teaches you to observe your body and mind without judgment. You just relax into your own being.

In addition, researchers have found that meditation helps quiet nerve receptors in a region of the brain known as the default mode network. Many studies have linked depression and anxiety with overactivity in this area of the brain. Try to meditate for at least ten minutes a day to start, and you can even put on relaxing music to help your mind ease into the practice.

(Editor’s note: If you are currently taking prescription medication, consult with your physician before taking this natural herb)

You can find this natural herb in the form of capsules, teas, and extracts such as essential oils. For centuries, it has been used as a holistic treatment for a variety of nervous system disorders, including depression and anxiety. While research is still ongoing regarding how exactly this herb works within the brain, many scientists have found that St. John’s wort offers better treatment than antidepressants in people with mild to moderate depression.

Similar to standard SSRIs, or selective serotonin reuptake inhibitors, St. John’s wort is believed to increase serotonin levels in the brain, and may also boost other neurotransmitters, such as dopamine. Make sure to find organic supplements if you choose to take these, and make sure not to mix them with prescription antidepressants, as this could cause an overload of serotonin in the brain.

Most people turn to coffee not just because of a caffeine addiction, but because of the warm, calming effect it has on the body. However, in people with moderate to severe depression, caffeine can limit serotonin production in the brain. Not to mention, coffee gives you a temporary spike in energy, but you then come crashing down as your blood sugars decrease.

Indeed, caffeine is notorious for wreaking havoc on the body’s ability to stabilize blood sugars. Instead of pumping your system with caffeine, drink non-caffeinated herbal teas or coffees instead. Herbs can help heal depression in the long-term, and you will avoid the blood sugar volatility that caffeine inevitably causes. 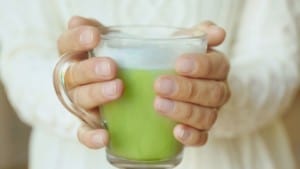 As you all probably already know, regular exposure to sunlight helps us produce a vital nutrient in our bodies: Vitamin D. This vitamin helps bolster our immune systems, promotes strong, healthy bones and teeth, and helps us absorb calcium.

In addition, an international team of researchers found that Vitamin D helped synthesize serotonin and dopamine within the brain, two chemicals that promote happiness, balance, and well-being. Do you live in an area where you can’t get adequate sunlight? Then take Vitamin D supplements or invest in a “light box. ” These measures will ensure that you get some exposure to sunlight, whether natural or synthetic.