Toxic shock syndrome (TSS) is a condition where bacteria attack the body with harmful toxins. Mostly linked to tampon use in women, TSS may also affect children or men of any age. Around 0.8 to 3.4 per 100,000 TSS cases are recorded in the U.S. every year. It’s rare but it is a life-threatening condition, so here are some early warning signs of toxic shock syndrome.

“The two things that should alert patients and physicians are a very high fever and a sudden drop in blood pressure, which could cause fainting spells…” – Dr. Anthony Chow

1. You’re sore all over and you have a headache that won’t go away.

You’re feeling tired and sore, as well as experiencing muscle pain all over your body. You have a headache that won’t go away even when taking over-the-counter pain medication. Worse, if your muscle pain is accompanied by fever (from 102°F/38.9°C or higher), as well as a general feeling of not being well, then you could be suffering from early symptoms of TSS.

You spot an inexplicable rash on your palms and soles of your feet. It looks flat, without any bumps or texture. This rash will peel and scale as if you have a typical sunburn. Generally, rashes aren’t life-threatening but if you also have a “strawberry tongue” or redness in the mouth, you need to seek a doctor immediately because it might be TSS.

Along with a red mouth or tongue, you might develop redness around the eyes. This is because the bacteria have entered your bloodstream and your body’s immune system is reacting to it. Bloodshot eyes may also itch and burn due to the irritation. Until you visit a doctor for a proper diagnosis or treatment, remove any contact lenses if you wear them. 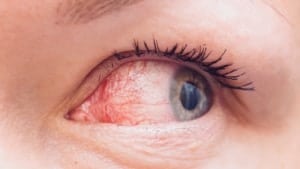 Disorientation and confusion manifest within 48 to 72 hours of TSS, as per a study. Apart from this, you could also be feeling agitated and irritable, and may develop hallucinations. You could also be unresponsive to someone talking to you because your body is already in shock.

5. You’re either vomiting or have diarrhea.

There are a lot of other illnesses that have vomiting or diarrhea as symptoms. But if you’re experiencing this, along with the rest of the signs enumerated above, you might have TSS. See a doctor immediately. If you don’t have TSS, non-stop or prolonged vomiting or diarrhea would still be concerning because it can lead to dehydration that will make your body weak and lead to a kidney shutdown.

This condition is a medical emergency. Don’t delay a visit to the hospital if you have a combination of the above symptoms. You need to have someone with you when you’re going to the doctor for the diagnosis and treatment, as you might not be able to answer the questions properly anymore. Hospital staff will check your blood pressure, body temperature, and heart rate and your doctor will likely order blood tests and urinalysis.

TSS can develop suddenly but the severity of the symptoms will vary among patients. If your TSS has been confirmed, you will require intravenous fluids and antibiotics to level off your blood pressure, eliminate the bacteria, and protect your organs from the toxins. In extreme cases, dialysis might be needed for a patient suffering from TSS to prevent kidney failure. If the bacteria have infected soft tissues, then surgery might also be necessary.

Recovery from TSS depends on the person’s immune system and how promptly the treatments were administered.

If you’re a tampon user, it’s important to change to a fresh one every four to eight hours. Use the kind of tampon with the lowest absorbency and never sleep using a tampon when you have your period. Letting the tampon soak overnight can increase the risks of bacteria developing in your body. Instead, wear a pad when you sleep and also switch to pads when your period flow is lighter.

TSS develop because of bacterial strains like staphylococcus and streptococcus. At least 20 to 30 percent of humans have these strains present in their body most of the time. It is hidden in the skin, nose, or throat. However, these usually don’t produce toxins so there are no health threats.