Everyone makes judgments. Some are sound judgments born of wisdom and experience and are meant to make a person’s situation better or to instruct them in making more appropriate choices or actions in the future. When a person is judgmental, they are being overly critical to a point that it is harmful, or at best, counterproductive. Judgmental people are usually very critical of themselves in their own internal monologue and their criticism of you is just an extension of their own internal mental space.

Dealing with judgmental people is not easy, and most of us just choose not to associate ourselves with those people. But, how do you deal with someone who is judgmental that you can’t avoid? Indeed, you can’t just write off a coworker, boss, or family member.

Here are five comebacks when someone is being judgmental and overly critical:

“I Forgot You Were Perfect in Every Way.”

No one is perfect, and when someone is judging you harshly, they are often using the same voice they use with themselves. People who judge you harshly often judge themselves harshly as well. Remind them that they are not perfect either and that we all have things we are working on to better ourselves. We are all flawed and imperfect, so don’t take their judgment personally. Just remind them of their own imperfections and let it go. 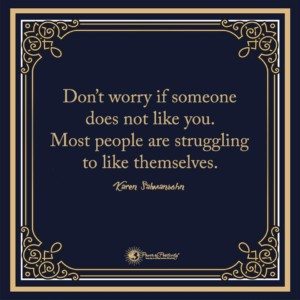 “I Was Born To Be Awesome, Not Perfect.”

Everyone is great at something, but no one is great at everything. Let them know you understand that you are not perfect and that you make mistakes sometimes. But also remind them, and yourself, that you are an awesome person in your own right. Use humor to deflect their negativity rather than letting yourself absorb their negativity. Admit to yourself and to them your own crazy awesomeness. Revel in your own flawed nature and let them see you just don’t care what they think about you or your choices. You are the captain of your own ship and no one else can tell you how or where to sail that ship.

“You Can’t See That Board Sticking Out Of Your Eye, Can You?”

This is a reference to a passage in the bible, so it might be best used against people who shake their own bible at you. The passage talks about pointing out the speck of dust in someone’s eye while having a giant board sticking out of your own. We often can’t see our own flaws even when they are glaringly obvious to others. Remind the other person that they have their own issues they need to work on and should focus on fixing those before pointing out other people’s flaws or failures.

“If You Were Any More Negative You Would Collapse Into A Black Hole.”

“Is It Hot In That Glass House Of Yours?”

This is another reminder that they do not live in a fortress of perfection. Instead inhabit a glass house of flaws like the rest of us. When you live in a neighborhood of glass houses, it is best not to start throwing things. Otherwise, their own reality could shatter if you start throwing rocks of judgment.