Self-doubt is a crippling, self-defeating disease that creeps in unnoticed, takes up residence without asking, and can devastate your entire life.

But it doesn’t have to. Even though millions of people suffer every day from some form of self-doubt (almost 85% of Americans, according to a recent statistic), millions more crawl out from underneath its shadow and establish a life that proves to everyone that victory is possible. All we have to do is fight. Here are a few things I did to do exactly that.

One of the things that helped me the most when I started turning in my battle against self-doubt was to recognize when the feelings were beginning to creep in and put a stop to it. I’ve struggled with it for most of my adult life (beginning roughly in high school), so I was familiar with the symptoms: despair, uncertainty, inferiority, feeling of being an imposter, etc.

The difference between me now and me 15 years ago is that now I was willing to stop it in its tracks. To be sure, resisting self-doubt is much harder than simply letting it wash over you. It’s a strangely comforting feeling to feel like you’re not good enough, almost like low expectations meets a self-fulfilling prophecy.

But you know what feels even better? The ability to stare down your insecurities and prove to yourself (and to everyone else) that they won’t beat you. That’s what life’s about. But in order to do that, you have to stop them before they begin to take hold of your life, and that includes saying no right at the outset.

Whenever I was struggling with self-doubt, the last thing I wanted was to open up and talk to someone about it. It almost felt as if by bringing it up, I was verifying it as factual – or, even worse, that other people would verify it for me. Either way, that couldn’t happen. So I bottled it up and kept it locked deep inside me.

However, that first time I opened up was scary. I stuttered, my hands started to get clammy, and I almost couldn’t get the words out. But once I did, they came full force, like a tidal wave of emotions pouring over my friend.

And then a funny thing happened. Rather than stiffen up and leave the room, he gave me a hug that lasted about ten seconds but felt like a lot longer. Then, he looked me in the eye and told me that he struggles with it too. It was an incredibly cathartic moment, and one that I am still thankful took place. Now, not only do I have a friend that I can confide in, I have an accountability partner that I can turn to whenever I need.

You’d be surprised how much your mind plays tricks on you. Since the origination of self-doubt begins in the mind, it can be hard to put your thoughts down on paper, but once you do, you’ll be surprised at the things you used to doubt yourself on.

For instance, looking back at my journals from college, it’s almost humorous to see what I doubted myself on: grades, relationships, internships, etc. Now, as a moderately-successful 29-year-old, the topics may have changed but the feeling of doubt remains. What I learn from those journals is one simple fact: no matter what, I’ll be fine. 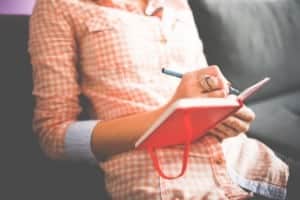 To progress in life, you have to be willing to take chances. Whether that means overcoming a physical hurdle or, as in this case, a mental hurdle like self doubt, the only way forward is right through the thick of things.

However, what I realized is that defeating the small times of doubt gave me confidence to grow even higher. Then I conquered the next biggest hill, then the next biggest, then the next, until I eventually reached a position where I believed I could do anything. Even if I didn’t always feel like I could, I at least knew – intellectually speaking – that I was more than able.