If you have hypertension (high blood pressure), getting the condition under control should be a top priority. Also, lowering your blood pressure is a great way to reduce your chances of suffering a stroke or heart attack.

Those medications are effective. However, making smarter food choices can also make a difference when it comes to getting your blood pressure under control. In this article, we will detail 15 foods to avoid if you have high blood pressure. And we will highlight some foods that may help improve the health condition.

WHAT IS BLOOD PRESSURE?

TOP 15 FOODS TO AVOID IF YOU HAVE HIGH BLOOD PRESSURE

Now that we have a basic understanding of hypertension, let’s take a look at some of the foods that can potentially worsen the health condition:

Processed deli meats like turkey, ham, salami, and bologna, for example, are often cured, seasoned, and preserved using salt. Those processes can quickly increase blood pressure. To further illustrate this point, the average 2-ounce serving of lunch meat generally contains as much as 500 mg of sodium. And this is before adding pickles, cheese, and other condiments, which can push sodium levels even higher.

Similar to processed meats, bread is also high in sodium, and therefore, it should only be consumed in moderation if you have hypertension. Studies show that a single slice of bread can contain as much as 200 milligrams of sodium before ever piling on your favorite deli meats and condiments.

Unlike cucumbers, pickles undergo a preservation process that requires them to sit in a salt bath where they absorb a significant amount of sodium. According to the USDA (United States Department of Agriculture), 1 whole dill pickle spear contains roughly 390 mg of sodium, making them one of the top foods that should be avoided for those with hypertension.

If you’re a fan of pizza and have been diagnosed with hypertension, this is one food that you will want to avoid. Most pizzas, frozen or fresh, are loaded with cheese, cured meats, and tomato sauce, and all of these ingredients contain a large amount of sodium. In fact, many of the most popular pizza brands contain over 700 mg of sodium, according to the USDA.

Despite being a great source of protein, red meat contains saturated fat and sodium, both of which can contribute to hypertension. It is also worth noting that the saturated fat in red meat can lead to clogged arteries, which can trigger heart disease, heart attacks, and strokes.

Despite being an American breakfast staple for so many people, bacon is sadly another food that should be avoided if you have hypertension. Bacon is chock-full of fat, sodium, and calories. According to the USDA, 3 slices of this delicious breakfast meat contains upwards of 576 mg of sodium, 311 calories, and 3 grams of saturated fat.

If you have hypertension, it would be a good idea to eschew all foods that contain saturated and trans fats from your diet as they can both raise blood pressure. Some of the foods that contain saturated fats include full-dairy products, red meat, and chicken skin. As far as trans fats are concerned, they are primarily found in packaged and prepared foods like deli meats and frozen dinners, for example. Studies show that consuming too many saturated or trans fats can raise not only blood pressure but also your cholesterol. These fats can also increase your risk of developing coronary heart disease as well. Ideally, you should consider replacing animal, saturated, and trans fats with healthier plant-based fats, which can be found in seeds, nuts, olive oil, and avocados.

While not a food per se, alcohol should be avoided if you have hypertension. In fact, several studies show that consuming too much alcohol can even diminish the effectiveness of medications aimed at treating high blood pressure. Also, alcohol contains a tremendous amount of calories that can contribute to weight gain. That increase in weight can lead to hypertension. Moderate alcohol consumption, on the other hand, can help lower high blood pressure. Better yet, it may also provide some additional health benefits as well.

Like alcohol, caffeinated beverages like coffee and sodas can also lead to hypertension. Therefore, they should either be eliminated from one’s diet or consumed in moderation. Because caffeine is a central nervous stimulant, it causes blood vessels to constrict, which, in turn, increases blood pressure.

Similar to alcohol, consuming excessive amounts of sugar can lead to not only weight gain but also hypertension. Whether you have hypertension or not, it is still a good idea to limit your overall sugar intake. According to the American Heart Association, men should consume no more than 36 grams of sugar per day while women, on the other hand, should limit their sugar consumption to 24 grams per day. 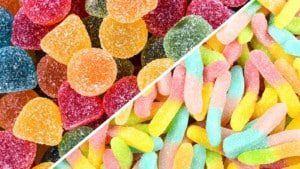 Despite being delicious and convenient, canned soups should be avoided if you have hypertension due to their high sodium content. The same can be said canned and packaged broths and stocks as well. Many of the ready-made soups, broths, and stocks on supermarket shelves contain as much as 900 mg of sodium, which is based only on a ½ cup serving size. A full serving of canned or packaged soup, broth, or stock can contain as much as 2,000 mg of sodium.