Just what is the role of parental piety? Do we ‘owe’ it to our parents to tell them everything?

Most certainly, there are things that children ‘should’ and ‘shouldn’t tell their parents. Problems with physical or mental health, being the victim of bullying, and difficulties in the classroom all fall into the former.

Plenty of subjectivity to be found here. In short, there is no good answer that applies to every person or situation. But perhaps we’re approaching this sensitive topic from the wrong angle.

Here’s what the writer means: “Should I tell my parents?” and “Why didn’t my child tell me?” are questions that are – far too often – asked in hindsight. For instance, when one’s child has done something unexpected, even harmful. In such circumstances, parental attentiveness can make all the difference. We’ll delve a bit further into this faculty later on.

In short: making a habit of asking such questions is akin to treating illness while ignoring means of prevention. Underlying attitudes, beliefs, and deficits all contribute to the already-complex situation.

In this article, we’re going to discuss things never to tell your parents. We’ll follow up this section by offering up a rudimentary discourse on parenting in the age of distraction.

12 Things to Never Tell Your Parents

Yeah, this one hurts. While your Mother or Father no doubt realizes that this is just an utterance out of frustration, it’s nonetheless hurtful. And anyway, it’s not your Mom or Dad that you (of your child) hates, it’s what they did that’s hated.

Instead of uttering these ghastly words, consider containing your emotions long enough to have a constructive dialogue. If this is not possible, simply walk away.

Telling someone to “shut up,” unless a jab arising from good humor, is never a good idea. These two words are also a catalyst; giving rise to and perpetuating feelings of anger. In the wrong situation, things can escalate quickly and get out of hand.

These words can also be hurtful. Few words put together are as isolating and as lonely as “shut up.” So desist.

Listen, we all want to be left alone at times. In many circumstances with certain people, there’s nothing wrong with a sharp “Leave me alone.”

But we’re talking about your parents. The protocol is a bit different.

Explain your need for personal space with candor, but with respect. If they’ve done something to insult or hurt you, say so. If they continue on, remove yourself from the situation and let the reason for such be known.

Though ridiculous and sophomoric, some “grown” adults think it’s okay to gossip about their spouse. Barring the commission of some serious offense, talk that disparages your partner or spouse should be off-limits.

Direct this conversation towards where it rightly belongs. The attention of your significant other.

True story: this writer was privy to a rather pitiful family conversation between two elders. An aunt blamed her mother – the former in her 50s, the latter in her 80s – of making her fat. Some variation of “It’s all your fault…” was used at one point.

Now, we’re not here to debate the relationship between childhood eating habits and adult obesity. But blaming a parent for something that’s within one’s control is a stretch.

All parents make mistakes. It’s a tough job. It’s not uncommon for the child to learn something and use it as a talking point against their parents.

The truth is that we know much more about child health and psychology than we did in the past. Moreover, parenting is a responsibility that has evolved over time.

Using acquired knowledge to bash the rearing skills of one’s parents is immature and hurtful.

Maybe they were a bad example growing up. But you’re grown up now. What’s the use of bringing up parenting mistakes?

Accusatory statements do nothing but hinder a good relationship. If something took place in your childhood that you need to address, say so. Have a discussion and allow them to explain their side of things.

Highly unlikely. And there’s a big difference between being closer to a certain child and loving that child more. This has everything to do with resonance – not love or affection.

Some parents do show preferential treatment, however. Witnessing this as a child – and even as an adult – can be very painful. The only way that you’ll feel some semblance of inner peace is by opening up a dialogue. Drama solves nothing.

This is a favorite of young kids and teenagers. If you’re an adult, then your Mother or Father must have done something wretched indeed. Even then, what’s the point of this?

Again, drama solves nothing. Let’s calm down and gather yourselves so as not to say something we’ll regret.

If there’s a common theme throughout this article, it’s this: theatricality doesn’t belong in a mature parent-child relationship. Statements like these are both pointless and potentially damaging.

Relationship problems are not solved by such words. Maybe you are sick of your family. But, for better or worse, this is still your family – and it’s the only one you’ve got.

Find another avenue of approach.

Though we may not see them, thousands of parents are nodding their heads in agreement.

Most youngsters should try and understand a couple for things. (A) Their parents work hard to provide for you, and (B) they don’t yet fully understand the concept of money.

One thing must be a prerequisite. Any request for money must follow an honest, rational explanation.

We’re not talking with a work buddy or some random stranger here. While we very well may not have the time for something, some respect is in order.

Take a minute to explain yourself.

Parenting and the Age of Distraction

“Nowhere is the impact of popular culture and technology on children’s relationships more noticeable than in families. Both influences have contributed to a growing divide between the traditional roles that children and their parents play.”  ~ Jim Taylor, Ph.D. (source)

As mentioned, many of the things that we say to our parents are reactionary. Poor communication – and the lack thereof – is often the impetus. For these reasons, we must look at a common culprit of communication and relationship difficulties: technology.

Throughout early childhood, adolescence, and early adulthood, healthy communication between parent and child remains vital. To this end, there is little doubt that the proliferation of technologies – especially mobile technology – has adversely affected these communications.

Let’s take a gander at some of the surprising statistics.

– 96 percent of Americans own a cell phone.

– 81 percent own a smartphone.

– 75 percent own a desktop or laptop.

Perhaps most troubling are the trends of teenagers. Here are some more stats:

– 95 percent of teens have a smartphone access to one.

– 45 percent say that they’re online on a “near-constant” basis.

Of course, we can not leave out social media.

Socioeconomics and Technology Use

The Pew Research Center cites the following statistics regarding teenage Facebook use by annual household income:

Why is this important? Multiple studies find a direct association between conditions of poverty and low childhood socioeconomic status and mental health. In other words, excessive technology use is a hallmark of poor mental functioning.

We needn’t be an expert of the human condition to read between the lines. But just in case:

– There are millions of kids lacking positive guidance and direction.

– And, there are millions of kids who are at risk of developing life-altering mental health disorders.

These shocking numbers demonstrate a failure of (a) societal values, (b) guardianship, or (c) both a and b. 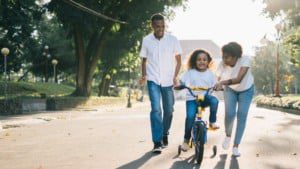 “Children have never been very good at listening to their elders, but they have never failed to imitate them.”

Let’s try and summarize the gist of this article into three points:

We need to take a good honest look at the situation in which find ourselves Doing so requires that we engage in some reflection. There’s actually a scientific term for this: reflective parenting.

According to a 2012 paper presented at a fostering parenting conference, reflective parenting involves understanding the mental states of parent and child. These mental states include the parent’s and child’s thoughts, feelings, beliefs, needs, and desires about the relationship.