The death of Robin Williams touched everyone. It’s hard to find anyone who wasn’t touched by this man through his acting and humor.

His death brought depression into the national spotlight and created a discussion around this silent disease and suicide prevention. That alone is something to be grateful to Robin Williams for, but we are lucky because he left us with many more life lessons to learn from.

Looking back over his interviews and his movies, there was so much to be learned from this creative, thoughtful and wildly intelligent man. Watch his performances, read his words and listen to him speak and you will see a man who cherishes what really matters and puts into perspective the things that don’t make a difference in the end.

It was hard to narrow down the lessons he left us through his work and his words to just eleven, so we decided to focus on the lessons from his life. If you want more lessons than you just need to watch “Dead Poet’s Society” again. It’s hard to find anyone who has seen this movie who doesn’t recognize the impact it had on a generation.

Williams said this about the film:

“I think ‘Dead Poets’ was probably my favorite, just to get started with the idea of doing a movie that people treated as more than a movie.” 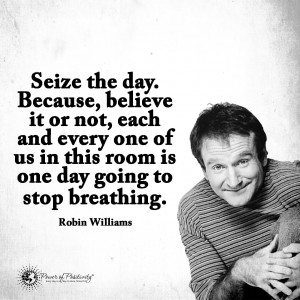 Here are eleven life lessons we can all learn from Robin Williams – in his own words:

1. Do what feeds your creative spirit.

2. Do whatever it takes to make meaningful connections.

“I basically started performing for my mother, going, ‘Love me!’ What drives you to perform is the need for that primal connection. When I was little, my mother was funny with me, and I started to be charming and funny for her, and I learned that by being entertaining, you make a connection with another person.”

3. Everyone has story that we know nothing about.

“I think the saddest people always try their hardest to make people happy because they know what it’s like to feel absolutely worthless and they don’t want anyone else to feel like that.”

4. Pursue relentlessly the things you believe in.

“No matter what people tell you, words and ideas can change the world.”

5. There is a lesson to be found in everything.

“You will have bad times, but they will always wake you up to the stuff you weren’t paying attention to.” 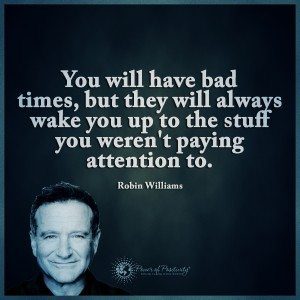 7. Sometimes the best response is no response at all.

“Even fools seem smart when they are quiet.”

8. Find the silver lining in every experience.

“Sometimes over things that I did, movies that didn’t turn out very well – you go, ‘Why did you do that?’ But in the end, I can’t regret them because I met amazing people. There was always something that was worth it.”

9. Keep alive the things that make you feel alive.

“You’re only given a little spark of madness. You mustn’t lose it.”

10. Even the most brilliant, confident, and most successful people are insecure at times.

“The essential truth is that sometimes you’re worried that they’ll find out it’s a fluke, that you don’t really have it. You’ve lost the muse or – the worst dread – you never had it at all. I went through all that madness early on.”

“Winning an Oscar is an honor, but, between you and me, it does not makes things easier.”