Have you ever walked into a room and immediately known that you’d interrupted something terrible, like a fight or a generally bad mood? That’s how powerful negative thoughts and feelings can be. So if you’re around negative people, it can be detrimental to your mental and physical wellbeing.

Luckily, there are ways to block out the negativity and focus on staying positive, happy, and healthy. Better yet, it’s easier than it seems! All you need is a good heart, determination to stay happy, and the desire to rise above the mess and chaos of someone else’s negativity.

Here Are 10 Ways To Never Let Negative People Influence You

People will think about anything they like, and you can’t control their thoughts. Sure, you can be a good person and perform actions that others will like, but there will still be those who dislike you, sometimes for no reason you can discern.

Negative people tend to lean towards disliking others, or finding fault in them, for wrong reasons. As such, if negative people surround you, they will likely be judgemental of you. You have to ignore them.

Emotional detachment sounds like a bummer, but it’s the best way to avoid being dragged down by negative people. Besides, your self-esteem should never be tied to other people, what they think of you, and how they feel about you. That is an unhealthy way to live, and you need to be secure enough in your self to ignore those who aren’t being constructive.

When a negative person consistently acts in this way around you, it’s their problem, not yours. In fact, you might as well entirely ignore them or offer a sympathetic smile before carrying on with your day. Don’t let yourself get dragged into self-criticism; opt for positive thinking and spiritual separation from the issues a negative person brings up.

But why do negative people do this? It is often due to an inability for them to comprehend their self-esteem issues, leading to a lack of understanding that prompts them to project their problems on everyone else. Again, don’t take it personally. It’s on them.

It’s easy to get angry when negative people are around you. They have a lot of nasty, questionable, and eyeroll-worthy things to say, often for attention or as a coping mechanism. But when you react to them impulsively, you only feed into the negativity.

We know just how difficult it can be to control those automatic emotions. But are negative people worth that effort from you? (They aren’t!) So take a deep breath. Count to ten. Tune out the negative person’s speech as you do so if necessary.

Then, identify the emotion causing your anger. Putting a name to a feeling often makes it more understandable, allowing you to conquer it. You can then react instead in a more proactive way by:

4.    Look For Solutions, Not Problems

The most common trait that all negative people share is their constant insistence on pessimism, even in the best circumstances. You can only imagine, then, what happens in adverse situations! Negative people have no desire to see silver linings – they’re too focused on the dark clouds.

To be free from negative influence, you just have to do the opposite. Don’t look at all the problems and build them up until they’re overwhelming in your head. Break them down into small, easy-to-process chunks. Then, once you’ve made sense of them, shift your focus entirely. Stop thinking about the problems. Think about the possible solutions.

This is important not just for unexpected incidents, but when dealing with negative people in general. Don’t focus on how stressful they are to be around – find a way to take polite leave of the situation so you can be right out of there.

5.    Manage Your Time and Attention

Someone who is negative can take up a lot of your time and effort. Not only do they bog down in-person situations, but your stress over dealing with them can live on in your thoughts long after you’ve left their vicinity.

Managing your attention and time so as not to give too much of it to negativity is crucial. The more time you spend being negative, the less positive thinking you can maintain. If a negative person is taking up too much of your time in person, you can:

Is a particular topic turning into quite the downer? Switch it up and make it lighter! Sometimes all a conversation needs to be pushed in the right direction is a little bit of positive energy. You can do this by:

Of course, this doesn’t work on all negative people. Many of them find contentment in using negativity as a response to any inkling of something positive. But some people get cynical about specific topics and revert to “normalcy” once you change the subject, and others may be distracted by your robust and happy energy.

7.    Pick Your Thoughts and Attitude

Negativity and positivity are all about how you think and what you feel. As such, if you learn to get in touch with these aspects of yourself, you may be able to stand above a negative crowd. Here are three ways that you can try doing so.

You get to decide how your attitude is for the day. If you let yourself feel gloomy and glum all day because of a few negative people, you’re choosing a bad approach that will ultimately cause a sharp decrease in positive thinking.

Positive affirmations and mantras are lovely. Essentially, you pick a specific phrase and repeat it to yourself over and over again until you begin to believe it and feel it for real.

When a negative person starts to get to you, pay extra attention to the way your thoughts begin to shift. What tends to trigger your most negative responses? How can you avoid them? How can you make these thoughts better and refocus them? 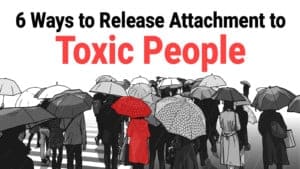 8.    Understand That You Can’t Change People

People can change, but other people can’t change them. You can try to educate or help those around you gently, but at the end of the day, they are the ones who decide whether they change or not. And, chances are, until they recover from whatever is causing them to be so negative, that change is not going to happen.

Just be the best version of yourself and let go of any feelings of obligation towards negative people. You don’t owe them any assistance, and most of the time, they don’t seem to want it! Focus on yourself and the people in your life who are more positive.

Yes, it sounds harsh. But negative people are people. They’re human and full of complexity and flaws. Accepting these sides of them and setting boundaries as needed, so they don’t drain you is all you have to do. Be kind, and the rest will follow.

9.    Don’t Tie Yourself To Perfection

Perfectionism is a pointless ideology. But when you’re around negative people, that can feel like it’s all they want. They’re so critical of themselves and everyone around them that it may rub off on you, and you may begin to strive for that impossible standard.

High levels of perfectionism have a link to depression, anxiety, and other non-positive circumstances, according to science — this likely because this is a very unattainable target. Human beings are inherently flawed, and that’s valid; perfection does not determine anyone’s value.

There is no way to achieve perfection, so instead, be the best version of yourself that you can be! Always strive to improve yourself and be better. Don’t let negative people trick you into believing that anything less than perfect is unacceptable. The more you grow, the more you’ll realize that you’re beautiful, just as you are.

Lots of negative people in your life? It’s time for you to question why that’s the case! Instead, go out of your way to find people who are positive, supportive, understanding, and encouraging.

Does this mean you may have to cut off some friends or whittle your friend list down significantly? Maybe. But studies show that having a smaller number of terrific friends is much better for positive health and wellbeing than having many mediocre friends. So don’t be ashamed of just having two or three people you can trust. Size never matters in a support system. 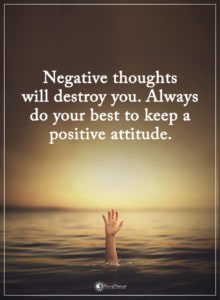 Final Thoughts on Freeing Yourself of the Influence of Negative People

Negative people can be challenging to filter out. They tend to be very loud and open about their feelings, even to the extent of accidentally harming other people. But with these tips and tricks, you’ll be able to reduce their influence on you significantly, allowing you to live a better, happier life.