“I’m tough, ambitious, and I know exactly what I want. If that makes me a bitch, okay.” – Madonna

We’ve witnessed incredible progress in the status of women in the past 100 years. That said, the demographic that makes up nearly 49 percent of all people is still due some postponed justice.

Although there is much debate regarding the true “status” of women in society, consider these statistics:

– Of all Chief Executive Officers (CEOs) of Fortune 500 companies, just 22 of them are women.

– In a study of 272 women, 54 percent reported having experienced workplace sexual harassment.

We venture a guess (and hope) that most people reading this article hold the viewpoint that both genders are equal. Different, but equal. Sadly, society as a whole has obliviously failed – on numerous occasions – to bridge the gap that exists between the sexes.

As a result, women have had to endure struggles that are not often voiced. Consequently, most women have inherently strengthened themselves from having to endure unjust treatment. Problems persist, but so does the female will. 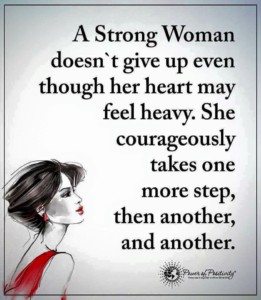 This segues into this article, “10 Things to Stop Giving a Damn About When You’re a Strong Woman.” While the title may sound somewhat combative, it is not intended to be as such. But the truth is that women do need, and should have, internal characteristics that help them navigate a society that can be very challenging.

Here are 10 things strong women don’t give a damn about:

1. Giving a damn about fashion

Some women love fashion for the sake of the art, and that’s different. But “keeping up with the Joneses” is not something women should take particular pride in. The purchase of an overpriced garment – one that will be “out of fashion” in a month or two, is definitely not something a strong woman should give a damn about!

This writer is a man, and one that has no quibbles about giving women a heads-up in the “class” category. Hey, when the majority of crimes are committed by men – including aforementioned, ubiquitous sexual harassment – there should be faint argument otherwise.

That said, strong woman, despite all of your good intentions, stop giving a damn about that unsavory character you once called a “boyfriend.”

3. Giving a damn about “staying in your place”

This is not 1916, it’s 2016. Women should not feel obliged to remain content with “keeping quiet,” “keeping about the household,” and other antiquated, compartmentalized roles they “should” have. Give us all a break. Strong woman, you don’t need to “stay in your place;” quite the contrary, we need your good head and heart to venture outside of it.

4. Giving a damn about toxic relationships

Kind of related to #2, but more broad in scope. Most women are incredibly empathetic and loyal, and some are prone to avoid conflict with whoever may be toxic in their life. The truth is that some people are bad for us, even if they do not recognize it.

5. Giving a damn about mistakes made

This one applied to both sexes, but strong women shouldn’t get too carried away by past mistakes. As mentioned, women have a tendency to “feel” a bit deeper than their male counterparts; this includes feeling mistakes for a period of time far beyond committing them. Rest assured, strong woman, you’ve got much to offer beyond some silly mistake.

In itself, there is nothing wrong with social media…it is just a tool. But, as with many other things people have managed to somehow screw up, we manipulate the tool to be something for which it wasn’t designed.

The prolific use of social media has had a “net negative” effect for many women, particularly teens and young adults. The simply reason is that we place far too much emphasis on who pays attention to us (i.e. “likes” or “friends”). Who cares? Be you strong woman, be you!

7. Giving a damn about a so-called “perfect body”

Ok…first off, this doesn’t exist. What exactly is a “perfect body”? Who gets to decide what constitutes a “perfect body”? This writer doesn’t particularly care for a slim, toned look for females; yet, it is so heavily propagated in a myriad of media outlets.

It’s difficult to explain exactly why this is, but one theory is money. There’s a lot of revenue in fashion (surprise!) and in publishing, and the “forces that be” have decided for us what body form to emulate and admire. Who gives a damn?

8. Giving a damn about status

There’s a lot of “status” related things on this list isn’t there? Sadly, our society pushes the “latest and greatest” onto young women more than any other demographic. Again, money is deemed to be the culprit here.

That aside, just be your “best you.” Define “success” on your own terms. Strong woman, your perceived “status” will never define your true character.

9. Giving a damn about conformity

Again, it’s 2016. Outside of a few distant places, women have the right to speak their minds. If you’re fortunate enough to live in such a place, please do so!

Strong woman, we need your input. You’re smarts, strong character and good heart are all desperately needed in this day in age!

10. Giving a damn about other people’s opinions

“You don’t have a right to your own opinion, you have a right to an informed opinion.” This statement, while certainly subjective in nature, can indeed apply to one’s character. Unfortunately, there are so many assumptions made about a woman’s character that has absolutely nothing to do with the truth.

So, strong woman…stop giving a damn about someone’s uninformed opinion!