Some of us absolutely despise walking into work in the morning. Why? Because we’re not happy morning people, that’s why. Unlike the other species of human being that actually enjoys the morning-time, we need either: (1) time or (2) caffeine.

It’s not uncommon to be an Eeyore (See “Pooh, Winnie the”) in the morning, especially in the workplace. A lack of energy and a desire to communicate can make mornings rough. Throw 7 AM into the mix and you become that person who mumbles a barely audible “…morning…” while pacing to your workspace, hoping nobody says anything to you that actually requires a response.

That being said, there are things we can do to your make mornings a little brighter (pun intended). In fact, here are 6 ways to brighten (pun intended) up your morning…

6 Ways to Start Waking Up Happy

OH, YES… despiser of the morning ritual, we know your secrets. How you just love to keep the shades and curtains fully closed, hoping that the sun doesn’t peer in to disrupt you of that precious shuteye.

Here’s some motivation for you, though. When you allow the sunshine to make its presence felt, your body stops making a little hormone called melatonin. This hormone creates the heavy sleepiness feeling that is felt just before sleep and just after waking up. This hormone is your enemy when attempting to become somewhat functional in the morning.

Here’s a little trick if you are dreading the idea of sun peering into your bedroom during your zzz’s…buy an eye mask. Or don’t buy one and just take a cold shower…or not…either way.

2 – Listen to some happy tunes

What is it about a good jam that just boosts our mood? Seriously…when you’re in a bad mood or just downright tired, put on a good tune and see what happens. There’s pep in our step, our brain is engaged, and that dreary feeling just dissipates.

This happens because music is thought to create endorphins, which are feel-good chemicals that create excitement while also making us more energetic. One piece of advice on this, however: don’t play the same some over and over again. You may just end up despising the song, crushing your alarm clock, or both.

It’s a good idea to make the music upbeat. Create a playlist of some sort with just songs that get you into a dancing frenzy; so no “Everybody Hurts” in other words…

When you sleep the body often contorts into positions that are not ideal. Ever wake up and try to turn your head, only to find out that this simple movement causes excruciating pain? Well, that’s what happens when you unconsciously attempt to rotate your neck 90 degrees in your sleep.

Stretching regimentally or with just a few quick movements brings an assortment of benefits. Among these various benefits are kicking your circulatory system into gear while awakening your nervous system, which results in feeling much more invigorated. 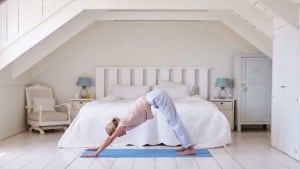 In addition to awakening the body, stretching also relieves symptoms of both stress and anxiety, while improving overall health. As it pertains to waking up, the stimulation of blood flow to the spine and nervous system are the most significant benefits.

Have you ever wondered (like I have) why Yoga has attracted an almost cult-like following? Well, now you have your answer. In fact, yoga offers huge benefits.

When you sleep, you are essentially fasting for 6-8 (or more) hours. You are abstaining from the ingestion of both drink and food for a pretty significant period of time. So, while you may indeed be losing a little weight, it causes some unpleasant effects when you awake.

Part of sleeping is that your body becomes dehydrated, which is natural because no fluid intake for a couple of hours usually results in some degree of the symptom. When your body experiences dehydration, the blood flow to your brain is reduced to a significant degree. As a result, the brain is more lethargic and less responsive to stimulation. 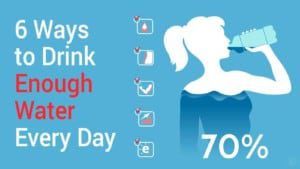 To counteract this effect, drink up to 32 ounces (two big, full cups) of water upon waking. This can be a difficult habit to attain because the brain is not fully attuned in the morning, making it easy to forget. Even when you remember, the thought of drinking a significant amount of water is less than appealing. However, the benefits are significant especially if you’re a morning Grinch.

5 – Be present and happy for all you have

As with any time of day, the act of being present in your thoughts is important. As mentioned, the morning is a time of day that significantly challenges your cognitive processes. Your natural instinct may be to immediately begin thinking about everything that you need to do in order to get out the door. Even those who have made a commitment to the acts of mindfulness and single-tasking find the morning to be an especially difficult time of day.